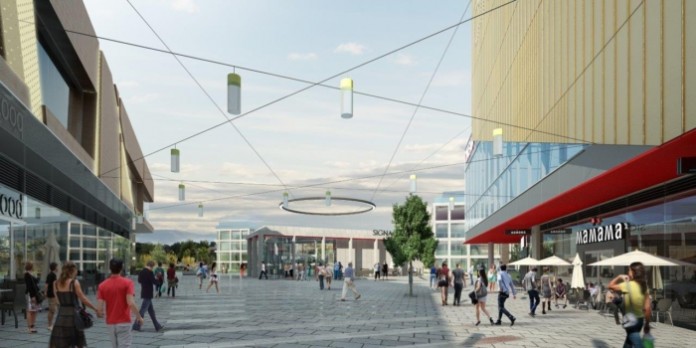 PureGym is the latest operator to sign up at the forthcoming retail and leisure park at Thorpe Park Leeds.  The national gym operator has agreed to take a 17,000 sq ft unit for a large gym floor and class studios in the 300,000 sq ft park.

The deal follows the recent news that ODEON, Boots, Next, M&S Simply Food, TK Maxx and The Outfit are also taking major stores at Thorpe Park Leeds.  Further deals for a number of restaurant operators are to be announced soon.

“We are delighted to announce PureGym as the latest operator to take space at Thorpe Park Leeds.  Our vision to deliver a vibrant retail and leisure complex at the heart of the scheme is proving a major attraction to operators given that we already have over 4,000 people working on site with the prospect of a further 10,000 when we complete phase two development, not to mention the local community.”

“This succession of deals is fitting into our ambition to create a unique extension to the existing business park with community, health, wellbeing, connection and enterprise are at the heart of the scheme.   We are working closely with these operators, our joint venture partners and all other stakeholders to ensure that Thorpe Park Leeds delivers an inclusive destination that integrates into East Leeds’s wider community.”

Rachel Dickie, Investment Manager at Legal & General Capital, said: “The letting to PureGym follows our recent announcement that the ODEON has signed up as the leisure anchor and that we have added Boots to the retail line-up at Thorpe Park Leeds. These new lettings further demonstrate the quality and vibrancy of the offer that Thorpe Park Leeds is bringing to the East Leeds community. This second phase of development is set to support the wider Leeds economy, acting as a major catalyst for further investment.”

Founded in 2008, Pure Gym is the UK’s leading low-cost gym operator with more than 180 sites and a turnover of £160 million.

PureGym provides access to affordable, flexible access to high quality gyms. Members sign up online with no contractual commitment, and most gyms are open 24 hours a day. Pure Gym is listed on the Sunday Times top Fast Track 100 and 100 Best Companies to Work for.

Duncan Costin, acquisition director at PureGym said, “We are pleased to agree a deal to open a PureGym at Thorpe Park Leeds.  Whilst we already have six gyms in Leeds we have identified East Leeds as a key target area where we feel that a high-quality fitness centre with low cost monthly membership and no contract tie is currently lacking.”

Thorpe Park Leeds is already a well-established 800,000 sq ft business park with over 60 occupiers including IBM, Atkins and National Grid.

Phase two is now underway delivering a further 1.65 million sq ft of mixed use accommodation.  This includes an additional 940,000 sq ft of Grade A office accommodation alongside the 300,000 sq ft shopping and leisure Park, as well as extensive parkland and sporting facilities.  Redrow has also purchased a part of the site and announced plans to build 300 new homes.

‘Paradigm’ is the first of the new office buildings to be completed and is available for immediate occupation.  It offers 31,650 sq ft of exceptional business space set over three floors with an additional feature floor and roof terrace directly overlooking the M1. Strong interest has been reported from a number of prospective occupiers and further office building projects are planned later in the year.