The Ruby Triangle, Old Kent Road development project has been given a boost as Link Asset Services sourced £45m of financing for the project’s developer, Avanton.

The mixed-use development scheme on the site known as Ruby Triangle, Old Kent Road in London, SE15 will provide 1,152 units, of which 40% will be allocated for affordable housing. The project spans 1.4 hectares, and includes two towers, one of 48 and one of 40 storeys, along with a church, a community sports hall and fitness centre, new connections and open space including a public park, flexible commercial space including incubator workspace and studios for local entrepreneurs, and private residents’ amenities.

The development will sit close to the proposed underground station which forms part of the Bakerloo line extension. It is one of several new builds bringing regeneration to Old Kent Road bringing increased housing capacity to an area of London with significant development potential.

James Wright, head of real estate finance at Link Asset Services comments: “This deal puts a solid foundation under a major development on the Old Kent Road. This is an impressive scheme that will bring significant benefits to the local community. We’re proud to play a role in advancing the project and look forward to seeing it join the skyline of South London.”

Omer Weinberger, Managing Partner, Avanton comments: “Creating over a thousand new homes, our development will help address London’s current demand for new homes. Like all our schemes, Old Kent Road will put community first with the new sports facility, new public park with outdoor gym equipment and children’s play areas. Our onsite incubator space, dedicated to local entrepreneurs and startups will contribute to the regeneration of Old Kent Road, making it a vibrant location for years to come.”

The loan is the second Fortwell Capital has extended to Avanton, and the third major facility written by the firm in the past month, bringing the amount of capital deployed by the lender since the end of February to more than £131 million.

Dan Smith, executive director of Fortwell Capital, comments: “Ruby Triangle is a first-rate scheme and it is great to once again be supporting Avanton in bringing forward a development that will deliver much-needed homes for London. Fortwell Capital has a large appetite for supporting developers and investors on larger, more-complex real estate financing opportunities – especially since the £400 million capital injection it received from Cain International at the end of 2018 – and the firm’s origination strategy continues to involve projects such as Ruby Triangle.” 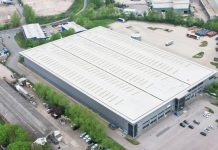