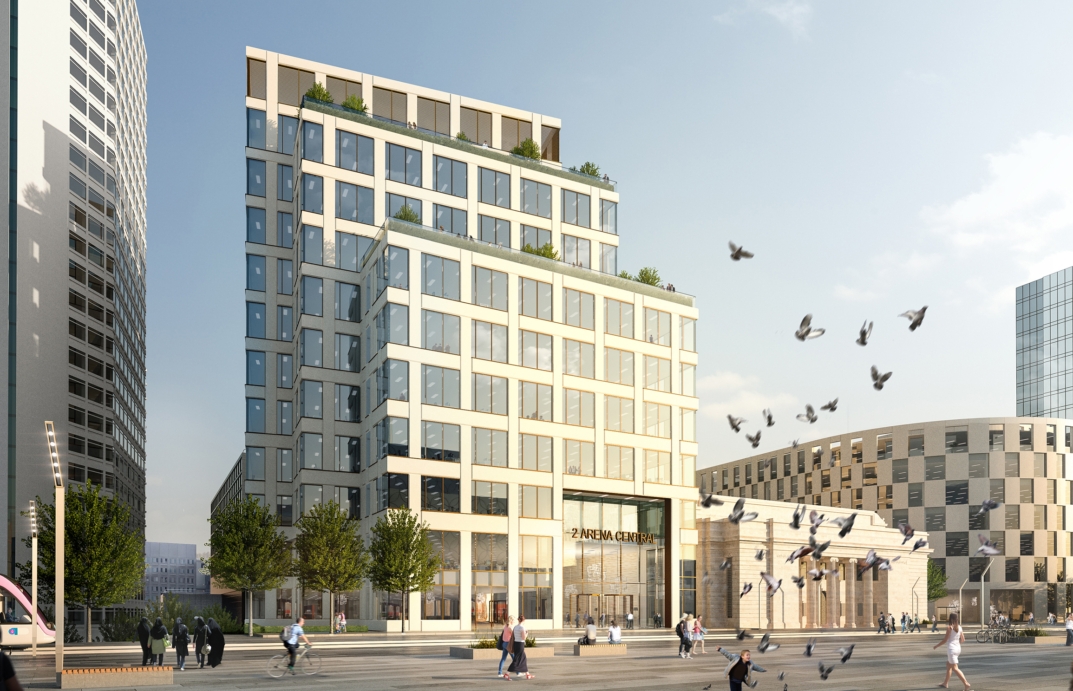 Arena Central Developments Ltd (ACDL) and HSBC have signed the largest property deal to take place in Birmingham since 2002.

HSBC will forward purchase the 210,000 sq ft 2 Arena Central, which will be the head office of HSBC’s UK ring-fenced bank serving personal and business customers.

Subject to securing planning permission at the end of April, work will start on 2 Arena Central in the summer and will be handed over to HSBC in mid-2017 for occupation from early 2018.

Designed by renowned architect Ken Shuttleworth of Make Architects, the building has the capacity to accommodate up to 2,500 people and will be the first in Birmingham to be constructed to LEED (Leadership in Environmental and Energy Design) Gold accreditation.

Birmingham is already home to more than 2,500 HSBC employees and around 1,000 head office roles will move from London to Birmingham before 1 January 2019.

Situated in the heart of Birmingham’s city centre Enterprise Zone, the 9.2 acre Arena Central site has been masterplanned to deliver over 1million sqft of office lead, mixed use development.  The deal will include the delivery of nearly £10m of new public realm designed by landscape architects, Gillespies featuring over 50 per cent soft landscaping.

Arena Central is being delivered by ACDL, a joint venture between Miller Developments and Pro Vinci Asset Management.

Phil Miller, Chief Executive Miller Developments, said: “The two teams have worked tirelessly to deliver what is the most significant deal in Birmingham for over a decade and will redefine the westside of Birmingham.

“This is great news for both Birmingham and for Arena Central and builds on the city’s burgeoning reputation as a leading centre for professional and financial services operators. We will continue to work with HSBC throughout the construction of 2 Arena Central to ensure the delivery of a first-class, tailor-made commercial environment.”

Graham Canvin, Head of Corporate Real Estate at HSBC UK, said: “We want to be the bank of choice in the UK and creating our ring-fenced bank head office in Birmingham gets us a step closer to that ambition for our 16 million personal and business customers.

“Arena Central was a natural choice for the home of our ring-fenced bank, with a building capable of being delivered to our timescales and to meet our exact specifications along with a connected, central position within the city. Our team will be working closely with ACDL ahead of our transition from London, which will begin in 2017.”

Sir Albert Bore, Leader of Birmingham City Council, said: “The announcement of HSBC’s relocation to Birmingham is the latest in a series of global companies that have demonstrated a commitment to the city by locating key services here, with Deutsche Bank at Five Brindleyplace being another notable example.

“This all contributes to Birmingham’s ongoing redevelopment, exemplified through investments such as the £550 million refurbishment of New Street Station, extension to the Midland Metro tram and galvanisation of the city’s network of public and private sector partnerships. Birmingham is demonstrating with absolute clarity that it is a desirable, connected and highly beneficial place to do business.”

Arena Central is bordered by Broad Street, Bridge Street, Holliday Street and Suffolk Street Queensway and is adjacent to Centenary Square, one of Birmingham’s most high-profile public spaces which is due to undergo a comprehensive £8 million refurbishment.

The extension to the Midland Metro tram, work on which is already underway, will include a stop on Broad Street, directly adjacent to the Arena Central site, further enhancing the site’s connectivity to the rest of the city.

Arena Central benefits from simplified planning and reduced business rates and forms a significant part of the city’s vision for regeneration, as laid out in the Big City Plan. Clearance of the site is already underway with work on the new public realm set to start later this year.