Comparing the seven-day periods up to and including Easter Monday in both 2019 and 2018, total revenue rose +4.0%, year-on-year, and footfall was up +5.0%, YoY. Additionally, like-for-like revenue increased by +0.3%, YoY, when new tenants are excluded such as JRC World Buffet and Yankee Candle plus upsized spaces in retailers including Skechers and Guess.

In particular, the fashion, footwear and sports categories benefited from the warm weather and a range of additional Easter savings on offer. With ten thousand offer booklets distributed by event staff over the four-day holiday, guests were treated to extra discounts and special offers. In addition, the installation of a giant dinosaur egg on The Boulevard of Wembley Park, adjacent to the entrance to LDO, proved a popular attraction for families and selfie-takers alike.

At the end of 2018, LDO became the first UK shopping centre to offer Dropit, the app-based, store-to-door delivery service. This hands-free service means visitors can enjoy LDO’s stores, restaurants,coffee shops and cinema without the need to carry shopping bags. The smartphone-based service was introduced to boost revenue for LDO’s retailers. During the week up to Easter Monday, average spend per head amongst users of Dropit was almost five times greater than by other guests, demonstrating the benefit to brands at LDO of the initiative.

Sue Shepherd, Realm’s Centre Manager for LDO, said: “It is pleasing that our consistently strong trading performance has continued despite the pressures elsewhere in the retail sector. We have increased revenue every quarter since we opened in October 2013 meaning our retailers and restaurateurs can prosper here. It’s why several occupiers have upsized at LDO despite cutting back elsewhere.”

LDO is a premium retail & leisure destination, with the appeal of major retail brands, a choice of popular restaurants and bars, and a range of experiential events, with the added bonus of serious,year-round discounts. It offers aspirational and desirable brands at up to 70 per cent off RRP throughout the year with premium fashion, leisure and lifestyle names include Converse, Nike, Kurt Geiger, Superdry, Guess, Gap, Lee Wrangler, Jack Wills, M&S and Hamleys.

Across the country, tourism numbers had a tough start to the year, with tax-free sales throughout the UK down by -6.0% year to date. At LDO, tax-free sales grew by +3.4% across the same period, a testament to the strength of its tourism initiatives.

LDO is one of the UK’s best-connected outlet centres. Just 12 minutes from Baker Street, 19 minutes from Kings Cross and 23 minutes from Waterloo, Wembley Park is served by the Jubilee and Metropolitan lines, as well as national rail from Wembley Stadium station to Marylebone and out to the Chilterns.

LDO is managed by Realm, the UK’s specialist outlet operator, and is part of Wembley Park, the £3bnurban regeneration scheme by Quintain adjacent to the world-famous National Stadium. The vision includes London’s largest Boxpark, that opened in December 2018, the recently announced Wembley Park Market and the Troubadour Wembley Park Theatre, due to open later this year. These landmark additions will join a growing community of renters in lifestyle-focussed apartments, under the Tipibrand. The scheme is the largest build-to-rent single site development in the UK, with a full-time residential community of some 20,000 projected by 2027. Wembley Park is set to attract over 20million visitors per year and a £328 million annual retail spend, which is more than Camden, London Victoria and Ealing Broadway. 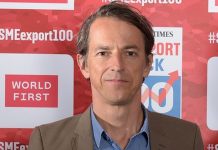