NOMA, a 20-acre mixed-use neighbourhood in Manchester city centre, has signed Amazon to occupy Hanover, one of Manchester’s most sought after office buildings, for its first major UK hub outside of London. Hermes Investment Management is the investment manager of the NOMA development, working on behalf of an institutional investor.

Amazon will occupy all six floors of Hanover, an Edwardian-era drapery warehouse at the scheme. Hanover has undergone a £34m refurbishment as part of ambitions to create a vibrant new community at NOMA – billed as an innovation district by leading think tank, the Brookings Institution, on account of its blend of different uses, heritage buildings and fantastic transport links.

In total, NOMA will provide 2.5 million sq. ft. of both new-build and renovated office space, at various price points, situated alongside housing, public realm as well as retail and leisure opportunities.

Sir Richard Leese, Leader of Manchester City Council, said: “NOMA has quietly emerged as a genuine creative innovation district and Amazon’s decision to locate a new office in Manchester underlines the strength of our ambition and the fantastic work Hermes has accomplished in shaping an extension to the city centre. We have world leading universities, a thriving tech scene and above all, a huge appetite for further growth. We welcome Amazon to Manchester and look forward to the next range of buildings being brought forward by NOMA.”

Chris Taylor, Head of Private Markets at Hermes Investment Management, said: “This commitment from Amazon marks a significant step in the delivery of NOMA, reinforcing Manchester’s status as a leading international city. Our ambition has always been to attract world-leading occupiers to Manchester by creating a sense of place and shaping one of the country’s first innovation districts.

“We remain committed to investing in regeneration to create a greater sense of social sustainability and wellbeing. This, in turn, delivers places that people want to work, live and socialise, while also attracting and retaining talent in the regions. Our holistic approach we undertake means we are committed to delivering excellent long-term investment performance and stewardship – while being abundantly conscious of the impact we have on the region.

“The ongoing support of Manchester City Council has been crucial in taking forward NOMA and we look forward to working with Amazon to deliver ongoing value for the city.”

NOMA has already attracted significant tech talent to Federation, a building located adjacent to Hanover. Co-op Digital, the tech arm of The Co-op, has created ‘The Federation’ – a community of digital businesses and innovators who share ethical values.

As part of its placemaking strategy, NOMA has also invested heavily in public space and champions participatory placemaking – the idea that communities grow when there are opportunities to get involved. Projects include the construction of The Pilcrow, an award-winning, community-led pub which was hand-built over nine months by a series of workshops across the city and PlantNOMA, a community shaped design studio and Village Hall.

NOMA has been tipped as one of the UK’s first ‘innovation districts’ by the Brookings Institute, a leading US think-tank, thanks to the scheme’s mix of high-quality office space and housing, seen as crucial to helping drive Manchester’s future growth.

Innovation districts, described by Brookings’ Bruce Katz as “a mash-up of anchor institutions, advanced research establishments and a network of start-ups and scale-ups in a small geographical area”, are helping reshape the geography of cities globally. “NOMA is definitely an innovation district, on account of where it is and what it stands for,” Katz told Property Week.

About the building and heritage

NOMA was the birthplace of the Industrial Revolution, being the site of Sir Richard Arkwright’s first steam powered cotton mill.

Hanover, a Grade II listed building, has been stripped back and remodelled by Manchester-based contractor Russells Construction to create a total of 90,000 sq. ft. of Grade A office space and 30,000 sq. ft. of ground floor retail and leisure space including basements.

Local award-winning architects Sheppard Robson oversaw the redesign of Hanover, which has retained and restored its original façade, as well as internal design features such as the glazed tiles in the stairwells and the coffered plastered ceilings. However, the upper floor open mezzanine levels, glazed central atrium and flexible floor plans mean the building is well suited to accommodate modern occupiers such as Amazon.

Tony O’Brien, Partner at Sheppard Robson, said: “We are proud to have been involved in the reinvention of Hanover and the blend of careful refurbishment, repairs and major modern insertions has resulted in a striking design, which combines the best of old and the new to create a contemporary office fit for modern use. After two years of refurbishment works we are delighted to re-introduce the building to the city of Manchester.”

Workman undertake property and project management across NOMA, and are project managers for Hanover, Dantzic and Redfern refurbishment schemes. Colliers and JLL are retained office agents.

In line with NOMA’s focus on responsible development, Hanover has achieved a BREEAM Very Good rating thanks to a heavy focus on low energy mechanical and electrical systems, upgraded thermal and acoustic insulation and close proximity to public transport. 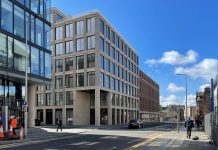