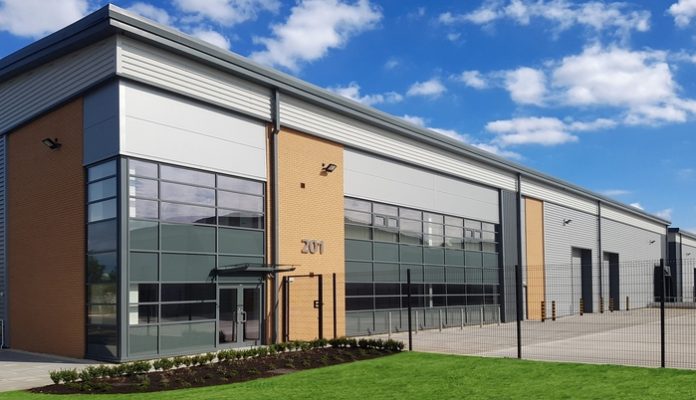 Now ready for occupation, the £7m initial phase delivers 90,000 sq ft of space across four separate buildings ranging in size between 18,500 sq ft and 26,350 sq ft. Each unit is self-contained and highly specified offering generous office provision, car parking and segregated yards designed to appeal to the needs of a wide range of logistics and industrial users.

Mere Grange, which is being built by Caddick Construction, sits adjacent to the St Helens Linkway and is within a five-minute drive of Junction 7 of the M62 facilitating easy access to the M6 and Manchester and Liverpool. It also within close reach of St Helens town centre.

Network Space also secured outline planning permission for the development of up to 120 residential units on the western side of Mere Grange, with a sale expected later in the year.

Stephen Barnes, Managing Director (Development) at Network Space, said: “We have successfully forged a great partnership with Homes England, St Helens MBC and the Combined Authority to create an exciting proposition at Mere Grange and we are delighted to deliver the latest phase of its development. There remains a shortage of high-quality industrial space across the region and Mere Grange is excellently placed to capitalise. Our Agents B8 and CBRE are already in discussions with a number of occupiers and we expect quick take up of the new space”

Steve Rotheram, Metro Mayor for Liverpool City Region, said: “The first phase of Mere Grange reaching completion is an important milestone for a development which will contribute to the city region’s economic growth as well as creating hundreds of jobs. I look forward to seeing the development continuing to progress.”

“Mere Grange is a great example of the support given by the Liverpool City Region Combined Authority, which last year granted a Single Investment Fund bid for £1.85m to carry this pivotal regeneration scheme forward – helping us to drive growth by accommodating increasing numbers of small and medium-sized businesses within the borough.”

The second phase of Mere Grange is expected to complete in 2019.

Network Space has been providing industrial workspace and warehousing for over 35 years and intends to deliver 2.5 million sq ft of industrial property over the next five years.