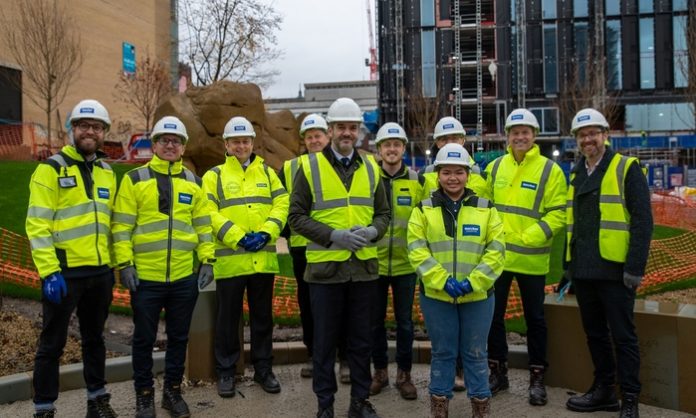 The Elshaw House and Cambridge Street site has been designated an Ultra Site – meaning it is recognised by the Considerate Constructors Scheme (CCS) as a beacon of best practice.

An ambitious programme of social value is being delivered as part of the Heart of the City masterplan. Across its own four sites, Henry Boot Construction has so far facilitated over 40 site visits and career-education engagements with local learners and the delivery of more than 20 work experience placements (including support for Sheffield City Council’s Construction Sector Routeways Programme). In addition, more than 20 apprentices have worked across the sites and over 40 new employment positions have been created in connection to the projects.

Henry Boot have also recently joined the South Yorkshire Cornerstone Group (a collection of local employers committed to careers education for local young people) as co-Chair. This group sits under the governance of the South Yorkshire Mayoral Combined Authority.

Mr Coppard, who spoke at the Climate Change Summit 2022 last week, was also very keen to learn about the sustainable credentials of the projects. In addition to the low-carbon specification of the buildings themselves, he was informed about the temporary hybrid power systems being trialled on the Kangaroo Works site. This ground-breaking technology aims to provide sustainable and efficient power to the site with significantly decreased emission levels.

“It was a pleasure to show Oliver Coppard around our Sheffield sites and share with him the great work we do across the region. It was also good to hear about his long-term ambitions for the region and how businesses like ours can play a key role in helping it grow and become a more attractive, cleaner and more prosperous place to live and work.

“We are extremely proud to be from this part of the UK and truly believe that the work we do leaves a lasting legacy for the communities in which we work.”

“We’re so pleased to see our vision for Sheffield and Heart of the City taking shape. It was fantastic to share with Oliver Coppard the exciting projects within the Heart of the City scheme that Henry Boot Construction are building on our behalf. The tour of Pound’s Park was a particular highlight, giving a glimpse of the future green space – a project being delivered with the Getting Building Fund provided through the South Yorkshire Mayoral Combined Authority.”