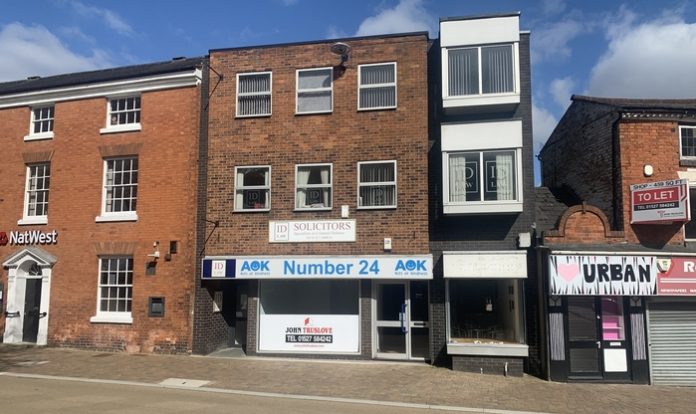 Property agents John Truslove have helped the Redditch food bank team secure bigger new premises just in time to cope with a huge surge in demand as a result of the coronavirus crisis.

The Acts of Kindness food bank was already looking for new premises before the virus first raised its head but is now installed in its new home on Church Green East just in time to provide urgent help for those in most need as the crisis grips the nation.

The newly installed foodbank manager is Rev Ian Evans, who is also associate minister in the Church of England’s team in the parish of Ipsley.

He said: “The new premises give us more space than we had across our previous two sites and is also much more central meaning people can get to us and access our service more easily.

“It wasn’t planned but it has happened at the best possible time – demand has surged to an unprecedented level in the last month.”

Acts of Kindness (AOK) food bank was launched in 2011 with a number of trustees from churches within Redditch, after seeing the challenging circumstances faced by some people in the town. Now a charity in its own right, working with more than 40 referral agencies it has provided tonnes of food to thousands of people in need over the years.

AOK had been running from distribution centres at St Stephen’s in Redditch and The Link at Winyates Centre, but it became clear that more space was needed in a more central location.

Working with the team at John Truslove, AOK has secured a five-year lease at £12,000 per annum on 973 sq ft of ground floor offices in the former estate agent’s premises at 24 Church Green East.

The premises, in Redditch’s principal office district, is just a short walk from The Kingfisher Shopping Centre, Market Square and the Quadrant developments.

“We are in an ideal place to serve local people in need. The foodbank trustees and a small army of volunteers have put in an enormous amount of work to get the premises ready, carrying out a deep clean and installing racking for the fresh and tinned food and dry goods that we provide.

“Fortunately, we have seen a huge increase in donations, both from businesses and from more members of the public. I think people were taken aback by some of the acts of selfishness that were seen at the start of the crisis, such as hoarding, and there was been something of a reaction against that.

“We have seen hundreds of thousands of people nationwide volunteering to help others while the rise in the donations to our food bank shows that both ordinary people and local companies want to play their part in supporting those most in need at this time.”

Ben Truslove, joint managing director of John Truslove, said: “No-one had any idea what was coming when the Acts of Kindness team first started looking for new premises, but we wholeheartedly support the work they have done over the years and were only too happy to help them find a more suitable base of operations.

“That move has proved unexpectedly fortuitous – both for the food bank and for those who need its services. People in Redditch are rightly proud of the work the food bank does and have shown that in practical terms with donations.

“In these difficult times we hope everyone will feel able to continue that support for those most in need.

“Helping organisations find the best premises is what we do here at John Truslove, and we have rarely been prouder of the help we have been able to provide.”