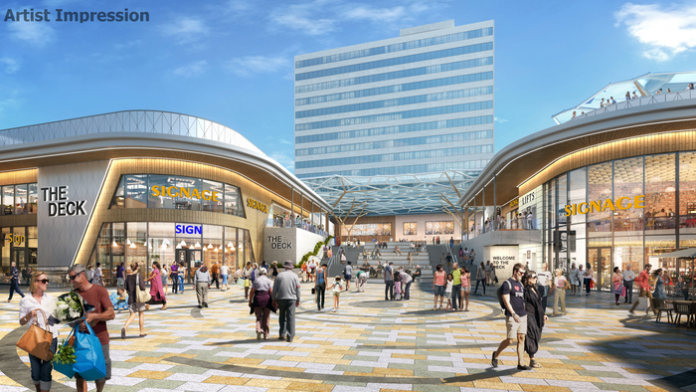 The Lexicon, the joint venture partnership between Schroder UK Real Estate Fund and Legal & General Capital, has announced that Hollywood Bowl Group (‘Hollywood Bowl’) and The Botanist (part of New World Trading Co) have committed to over 30,000 sq ft in the scheme, in the next proposed milestone in Bracknell town centre’s regeneration – The Deck.

The new development would see the town’s old Bentalls unit completely transformed into a covered public space with new food and leisure units linking into both The Lexicon and the refurbished Princess Square.

The UK’s leading bowling operator, Hollywood Bowl has agreed to take 23,000 sq ft at The Deck to install 20 bowling lanes, a bar, diner and amusements area, while The Botanist will bring its unique brand of concept bar and world-famous selection of cocktails to an 8,000 sq ft unit, with a new roof terrace topping the scheme. The signing of the two new brands also follows the recent signings of Phase Eight, Silentnight, and The Works, as well as a 12,000 sq ft PureGym unit within Princess Square.

Harry Pickering, Head of UK Retail at Schroders, comments: “Since opening just over two years ago, The Lexicon has continued to defy the trends of the current national retail market. The announcement of these lettings solidifies The Lexicon’s reputation as a stand-out retail and leisure destination, with more to come as plans for The Deck and more new names move forward and look to revitalise the day and night economy of Bracknell. The scheme, at the centre of town’s rejuvenation, acts as a shining example of our business strategy in action, as we focus on investing in carefully selected assets situated within winning locations.”

Peter Courtney, Director at Lunson Mitchenall commented: “We have always been determined to achieve the right tenants for The Lexicon, with the aim of creating a truly mixed used destination. We have seen excellent trading figures since opening and a continued interest from retail and leisure operators to secure space within the scheme. The signing of Hollywood Bowl and NWTC is testament to the success of a regenerated Bracknell town centre and its ability to pre-let best in class operators in what is a difficult market. These two top tier brands will enhance the leisure offer for The Lexicon and will completement the quality operations already on offer.”

Laurence Keen, Chief Financial Officer at Hollywood Bowl Group commented: “We are pleased to have secured another prime, high footfall destination to enable us to continue to execute on our new centre opening strategy. We’re delighted to be bringing a next generation Hollywood Bowl centre to Bracknell and to be a part of the exciting development of The Deck at the Lexicon scheme.”

These lettings follow the news last year of the legal agreement and £30m commitment between Bracknell Forest Council and its development partner, Bracknell Regeneration Partnership (BRP) – a 50/50 joint venture between Schroders UK Real Estate Fund and Legal & General Capital for the regeneration of Princess Square and creation of The Deck.

Lunson Mitchenall act as sole agents for The Deck at The Lexicon, Bracknell.