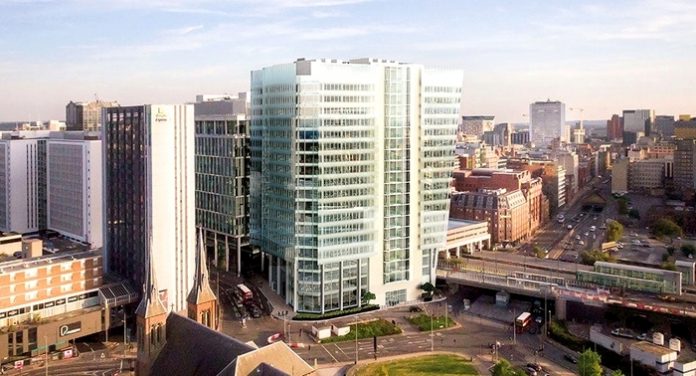 BT has announced plans to relocate to a Birmingham landmark which will become a base for up to 4,000 of its employees.

Three Snowhill will be the telecommunications giant’s primary new home in the city and a base to more than five times the number of people currently based in Birmingham. BT will occupy the majority of floors in the 17-storey development.

The group has acquired the lease and plans to move its staff in from the end of the year.

Graeme Paton, BT’s managing director of property and facilities services, said: “Unveiling our new site at Three Snowhill follows our announcement last year, when Birmingham was revealed as one of the first locations that will house our workplaces of the future.

“The city was recently ranked one of the most rapidly improving places to work in Britain and, thanks to securing this office space, we will become one of the largest employers in Birmingham with a visible presence in a strategic and important location.

“Our new building in Birmingham will bring our people together in an impressive and modern environment, transforming the way we work.

“Excitingly, it will become a strategic hub location for BT in the UK with a considerable increase in the number of colleagues we employ based in the city.

“We hope our colleagues will be inspired by the new office, which will give them the tools and environment to be able to thrive. This is also fantastic news for both Birmingham and the wider Midlands.”

Martin Towns, head of UK commercial and global capital partnerships at M&G Real Estate, which secured a 20-year lease with BT for Three Snowhill, added: “Our agreement today with BT further reinforces the success of our UK office development strategy, helping to provide the quality of accommodation modern business requires, whilst also providing attractive investment returns for our clients.”

He added: “Ballymore’s investment in the Snowhill Estate has created a new business quarter for the city, comprising the highest International quality offices and award-winning public realm.

“It has also delivered the viaduct, which enabled the tram extension from Snowhill across the wider city centre, and provided direct pedestrian access to the Jewellery and Gun Quarters and Snowhill Station via the new ‘high level’ entrance.

“We’re very proud of this legacy. It’s reflective of all our partners’ hard work that BT has chosen Three Snowhill.”

Three Snowhill is the largest ever speculative office development outside London, comprising more than 400,000 sq ft.

The 17-storey building is one of three office buildings on the four-acre Snowhill Estate.

Ballymore commenced the development of the estate in 2006, delivering the first two buildings by 2013. M&G acquired Two Snowhill in 2014 and agreed to fund Three Snowhill in 2016.

In addition to 1million sq ft of Grade A office space, Ballymore has delivered: the viaduct, enabling the tram extension from Snowhill across the wider city centre and pedestrian access to the Jewellery and Gun Quarters; a new high level entrance to Snowhill Station and new public realm, including the Metro boulevard and green wall, and Colmore Square piazza.

The 283,000 sq ft letting (comprising first floor, levels 7-17 and podium) to BT is the largest ever in a single building in Birmingham.