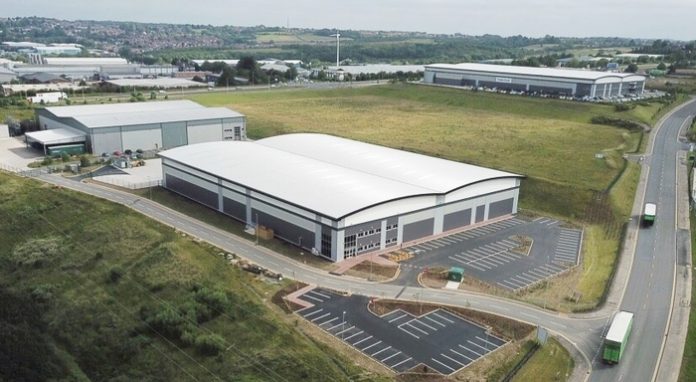 Castlewood Business Park sits adjoining Junction 28 of the M1 Motorway at its intersection with the A38 and provides one of the finest locations for manufacturing and distribution occupiers in the Midlands. The latest deal completed at Castlewood Business Park sees a speculatively constructed unit of just over 72,000ft² let on a new long term lease taking space now built on site and occupied to just under 2 million sq ft. An outstanding figure which has also seen the park provide jobs for over 2,000 already.

Agent for the scheme Tim Gilbertson of FHP commented:

“Over the last few years Castlewood has cemented its reputation as one of the Midlands foremost industrial and distribution locations as a result of its fantastic position adjoining Junction 28 of the M1 at its intersection with the A38 the added factors which we can offer her at Castlewood that help us to achieve success. Good levels of availability of labour, a willing and able workforce and a developer in the form of James Richards, Development Director at CWC Group, who grasps every opportunity, helps us to push the site forward and all of these factors enhance its attractiveness to every potential occupier.

Recent deals concluded saw further amenity brought to the site in the form of Costa Coffee, Spar Supermarket, Greggs and petrol filing station and all of these facilities have aided our attempts to secure new occupiers for the site adding additional attraction to the excellent location we have on offer.

Castlewood’s strengths have enabled our clients to take the sensible and admirable step of speculatively constructing a building of just over 70,000ft² and it is a delight to be able to say that we have completed a letting on that building bringing the total floor area now built and occupied on the park to just under 2 million sq ft.

It is hard to think of any competing site in the East Midlands or indeed further afield that has had such success in recent years and with over 30 acres of land left we anticipate further success in the near future.

Indeed we already have another design and build deal under offer and plans to speculatively develop more space on the park in the near future too.”

Development Director at CWC Group, James Richards, who has dealt with the site since its inception added:

“Castlewood has been the jewel in the crown for CWC in recent years. The fact that we have concluded another deal which takes us to nearly 2 million sq ft built and occupied is great to see, not only for ourselves but it is also a real boost to the local and regional economy.

As Tim suggests, we have any number of elements in our favour here and we have tried to be as proactive as possible, listen to potential occupiers needs, try to accommodate them wherever possible and also add value to their occupation and indeed the site as a whole by increasing the amenity offering for the benefit of one and all.

Not only do we continue to secure design and build deals, we currently have one in legals for the provision of a new facility for another local occupier, but we also intend to continue to speculatively develop space, available to buy or rent in order to provide much needed opportunities for local companies.

Our agents keep bringing us the deals and I was delighted to see Castlewood recognised as one of the best locations in the region. We will continue to do all we can to ensure that this remains the case and encourage further occupiers to the site.”