A Warwick-based company is celebrating a major milestone with a multi-million-pound move and expansion.

APC Streetwise Couriers, based on the Heathcote Industrial Estate and with a unit on the Bayton Road Industrial Estate near Nuneaton, is moving to a new state-of-the-art hub at the Tournament Fields development just off the A46 at Warwick.

The logistics carrier, which employs 65 staff, has signed a 15-year lease on a new 25,500 sq ft headquarters which will see them treble their space when they move in during November.

The move, completed through Leamington-based commercial agents Wareing & Company, comes 20 years after owner Dave Cleaver started working for the business which he then bought in 2015.

The company has delivery and collection rights for parcels and packages across the CV postcode area for the national APC network but the move will allow it to take more and bigger consignments.

Cleaver said: “This is a very big move for the company and will allow us to continue the growth of the business. We have simply outgrown our current base and we have ambitious expansion plans and this move will allow us to put those into action.

“Tournament Fields is ideally placed very close to the A46 and M40 and transport links are vital to our business. It also helps that two of our major clients are our neighbours!

“We have five double decked delivery lorries visit everyday and having a modern, state-of-the art building will massively improve our efficiencies.”

Bill Wareing, of Wareing & Company, has acted on the development since the first unit was developed in 2005.

The latest letting means that there are now 30 companies at the development employing around 1,500 people.

Wareing said: “This is a major letting not only for Tournament Fields but also for Warwick and Leamington. This is the first time the developers CWC Group has speculatively built on-site and created a building which perfectly fits the needs of a logistic company.

“It is also really rewarding that it has gone to a local firm which is successful and growing and has some considerable expansion plans.

“Tournament Fields is very much a mix of companies who have moved to the area and invested heavily, and also ones who have used the development to expand their presence in the area. They vary hugely in size and also in sector and it is a real success for the area.” 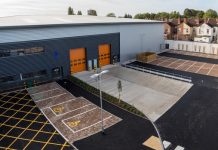