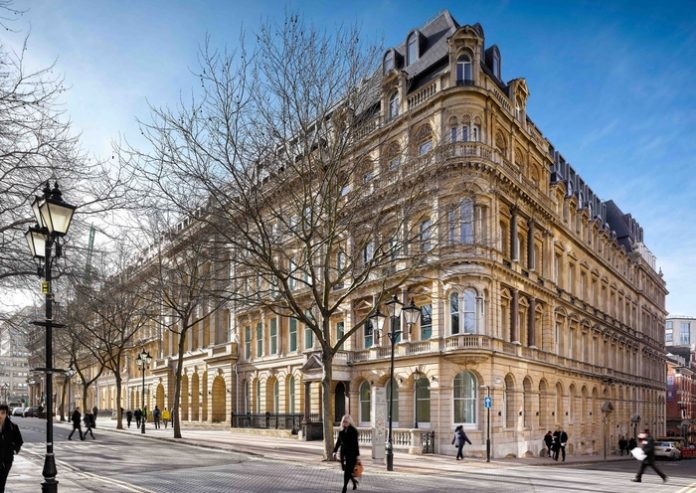 The remaining office space at 55 Colmore Row has been let to WeWork, at a record headline rent for Birmingham.

The letting is the shared workplace provider’s first in the city. It has taken three floors of space at the Grade II listed building, which is owned by Nuveen Real Estate’s European Cities Fund.

Originally built in 1878, 55 Colmore Row underwent a £30million redevelopment in 2015. An additional floor was added to the top of the building and the listed banking hall was refurbished and repurposed as a shared reception.

The building comprisessix floors of BREEAM excellent Grade A office accommodation. It is the operational headquarters to the Royal Institution of Chartered Surveyors (RICS). Savills and Pinsent Masons also call it home, while Gaucho and Fazenda occupy the restaurant units.

Luke Duckworth, portfolio manager at Nuveen Real Estate, said: “WeWork is the most exciting brand in the co-working sector. They have made no secret of their ambitions to get a foothold in Birmingham and we’re thrilled to have secured them at 55 Colmore Row.”

Mathieu Proust, general manager WeWork UK and Ireland, said: “I’m pleased to announce our expansion to Birmingham, the fifth city for WeWork in the UK. We’ve recently welcomed our 100,000thmember to WeWork in EMEA, and I’m excited to be continuing to grow our presence in the UK – our second largest market worldwide – where we’re home to a flourishing community of over 45,000 members.”

CBRE and Savills are joint letting agents at 55 Colmore Row. JLL acted on behalf of WeWork.

Will Ventham, head of Midlands office agency at CBRE, said: “Birmingham can now welcome WeWork to a super prime location within the city centre. This says a lot about the demand for this product, style of working and the growing maturity of this sector. The deal is reward for Nuveen’s strategic acquisition of prime assets across their European Cities Fund and WeWork’s offer always stood out, against healthy competition for the remaining space, as key to supporting the wider occupier mix.”

Nick Williams, director, office agency at Savills, said: “The letting is not only a reflection of the quality of the environment and location offered by 55 Colmore Row, but also modern working practice that supports a blend of traditional and collaborative work space in such a high profile building.”

WeWork will occupy the ground, third and fourth floors of the building. Fit-out will commence in June 2019, with a target opening date of Q4 2019.