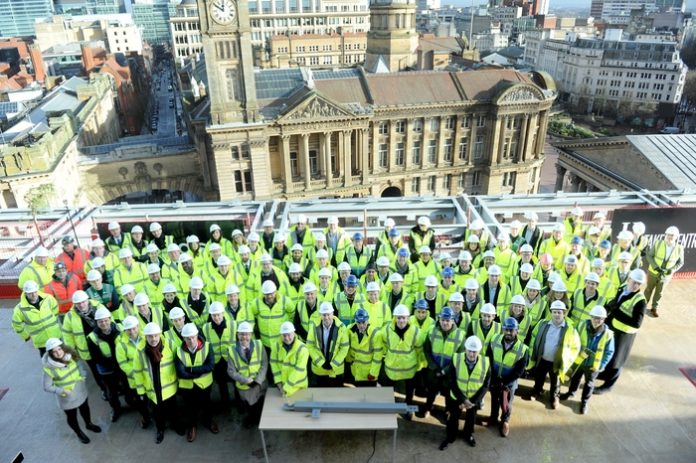 At the topping out ceremony, which took place on Friday (25th January 2019), a golden bolt was installed into the steel frame at the top of the building by leader of Birmingham City Council, Councillor Ian Ward, who was joined by Rob Groves, Regional Director of Argent, and David Ellis, Regional Director of construction firm BAM.

Cllr Ian Ward, said: “I’m immensely proud to be part of this topping out ceremony for what is already a superb new building in one of the UK’s foremost city centre developments. Paradise is an example of Birmingham delivering on its growth, skills and jobs agenda and a huge vote of confidence in the city.

“Thanks to the hard work of a lot of people, the city continues to move forward and we are beginning to feel the very real benefits and economic uplift of projects like Paradise. But as well as creating and sustaining new jobs for the people of Birmingham, Paradise is also about restoring and improving connectivity for pedestrians across the city centre and providing a fitting environment for our historic civic buildings.”

Featuring floorplates of up to 24,000 square feet and with a stunning terrace overlooking the revamped Chamberlain Square, the building is set to make a positive statement on the city’s skyline. The ground floor of the building will feature space for restaurant, bar and retail use, with tenant announcements expected later in the year.

Rob Groves, Regional Director at Argent, said: “This topping out is a huge moment for both Paradise and Birmingham. We have achieved so many milestones over the past 10 years, but this one feels extra special and reflects the huge momentum behind this incredibly significant scheme.

“Rising above the challenges of the liquidation of Carillion at the beginning of 2018, the scheme continues at pace with both of our first buildings advancing. 2019 will be even more significant with the completion of the first phase of Paradise bringing our first occupiers to the development. This will include the completion of the Phase 1 public realm that the people of Birmingham will be able to both witness and be part of.”

The next phase of Paradise will see the largest building yet – the 280,000 sq ft One Centenary Way – due to start on site this year with a completion date of 2022, and with a new 22 storey hotel to follow.

The development is being brought forward through Paradise Circus Limited Partnership (PCLP), a private-public joint venture with Birmingham City Council. The private sector funding is being managed by Hermes Investment Management and Argent is the development manager.

Chris Taylor, Head of Private Markets at Hermes Investment Management, said:
“The topping out of Paradise’s second building marks a big step in the delivery of the scheme, which is transforming Birmingham city centre into a leading and competitive international city. Delivering significant mixed-use schemes such as this in the UK’s main regional cities is a key part of our investment strategy alongside providing sustainable returns and, crucially, sustainable places for those that live and work there.”

Overlooking the Grade 1 listed Town Hall and Grade 2 listed Council House and Birmingham Museum and Art Gallery, Two Chamberlain Square sits at the heart of the Paradise development with direct access from the new public realm. An enhanced Chamberlain Square will open later this year along with the newly completed Centenary Way.

With columns four times higher than those on the Parthenon in Athens, and which pay homage to the adjacent Town Hall (itself a tribute to the Temple of Castor and Pollux in Rome), Two Chamberlain Square has been designed not only to form a dramatic, classical backdrop to the square, but to bring life and vitality to the whole of Paradise.

BAM Construction has been working hard on Two Chamberlain Square since early in 2018, overseeing a team of over 200, including 30 apprentices and trainees. The frame of the building quickly emerged last year thanks to a summer of favourable weather conditions.

David Ellis, Regional Director with BAM, said: “We have been working flat out to finish the initial construction phase which ends with the topping out of the building today. It has been a challenging but also hugely rewarding job to get Two Chamberlain Square to the position it is now in. As the façade work and fit-out continues this year I am sure it will become an instantly recognisable feature of the city’s skyline and an essential part of the Paradise development.”

Paradise Tower Crane 4, which can be seen towering over the site, is an integral part of the construction process. It is one of the largest tower cranes operating in Birmingham at 80 metres in height, equivalent to 20 double-decker buses, and with ballast weight of 32 tonnes – the equivalent of six and a half fully grown African bush elephants.