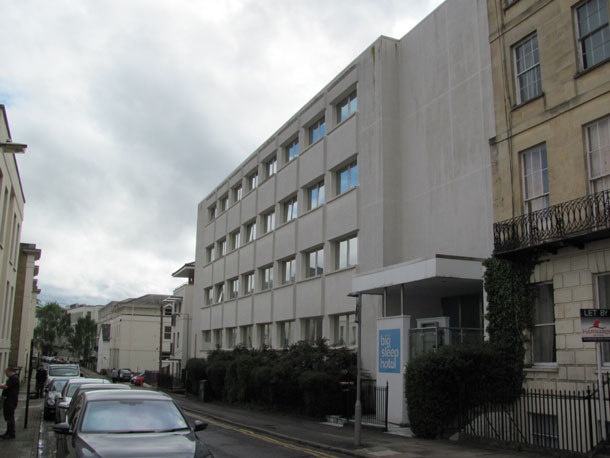 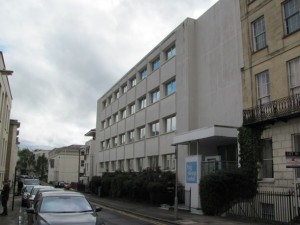 The groundbreaking Big Sleep Hotel brand  has been put up for sale. Hotels in Cheltenham, Cardiff and Eastbourne have been put on the market through sector specialists Colliers International.

Businessman, entrepreneur and reluctant reality TV star Cosmo Fry made the decision to concentrate on other business interests following a dozen years of pioneering design and development which has transformed public perception  of the hotel trade as well as creating   a whole new sub-genre of designer and boutique accommodation.

The Big Sleep chain – described by the Travel Trade Gazette as a ‘Travel Lodge with sex appeal’ –  has earned an enviable reputation for offering designer values on a budget since being  launched by Cosmo Fry and wife and partner Lulu Anderson in 1999.

Cosmo Fry said: “The Big Sleep brand was a bit of a bolt from the blue to the hotel industry as Lulu and I came to the sector with no background experience so we were not restrained by having to conform to anybody else’s ideas of how hotels should look or operate. We were thinking out of the box and have been able to develop the business organically.”

After a dozen years of hard work and effort Cosmo admits the decision to put the chain on the market is a real wrench.

“It  is extremely sad for us to be putting the hotels up for sale having put so much effort into them. The most difficult thing is letting the hotels go when there is clearly so much untapped potential within the brand.

“There is plenty of mileage left in the Big Sleep concept and we are hoping a bigger chain will recognise this as an opportunity to acquire a bespoke hotel brand with a proven track record.”

Colliers International hotels director Peter Brunt agreed the sale represented a unique opportunity to buy in to a unique, well established and much loved brand.
He said: “Big Sleep Hotels will be as familiar to millions of TV viewers as well as the hundreds of thousands of businessmen and travellers who have stayed in them.

”Cosmo Fry was one of the first people to see the potential in converting former office buildings  into boutique hotels offering a radical   alternative to some of the bigger, blander hotel offerings.

“He runs a number of businesses and has now decided to focus his energies elsewhere, leading to the decision to sell the three Big Sleep hotels. We are anticipating an enormous amount of interest in them, either individually or as a whole portfolio.”

The original Big Sleep Hotel in Bute Terrace, Cardiff is up for sale with offers around £2m on a long leasehold invited.

The  hotel opened in 1999 and has 81 letting bedrooms.  It  is well-located to take advantage of opportunities for trade in this busy city.

Formerly the offices of British Gas – it is located opposite the Motorpoint Arena and  John Lewis  within a short walking distance from Cardiff railway station and the Millennium Stadium.

The distinctive 10-floor building’s framed construction means that there is a huge expanse of glass affording excellent views of the city on all sides.

Cosmo Fry designed the furniture, fixtures and fittings for the highly individual minimalist concept and his Bath-based Counter Tops business supplied the materials to create the hotel’s striking ‘formica, fleece and fur’ finish.

There is a bar and reception lounge, a breakfast room seating 50 and a meeting room. The 81 bedrooms offer a highly versatile combination of 24 twins, one executive double, a penthouse double, six with two doubles, two with two doubles and one
single, two triple and one double with two singles.

The Big Sleep Cheltenham is priced at £3m freehold. The highly profitable 60 bedroom town hotel is in an ideal location in Wellington Street and was formerly a tax office.

Peter Brunt said: “Big Sleep Cheltenham has traded since the end of 2006 and quickly became established as a leading hotel in the town.  The combination of Cheltenham’s fine Regency architecture and proximity to the M5 has helped it to become a very busy commercial centre and it is also a marvellous base for tourist visitors.”

There is a small bar, a breakfast room with 40 covers and a meeting room  in addition to
60 letting bedrooms of which 27 are double, five zip and link, 14 twin,
four executive double, two suites, two family studios, two quads and four triples.

The seafront  hotel is modern, stylish and trendy, re-opening in 2008 after an extensive
refurbishment.

“The idea was to develop a sub-brand of Big Sleep on the Beach and I think we succeeded.”

The hotel boasts 50 letting bedrooms, which include a number of particularly
spacious family or group suites with a self-catering capability.

“The idea behind the larger rooms was to allow guests to recreate a sort of Big Brother on the Beach atmosphere. We were aiming to develop the theme all along the South Coast, which we see as very much uncharted territory for today’s hotel trade.”
Big Sleep Eastbourne has meeting facilities for up to 50 delegates in addition to 50 letting rooms with 11 singles, 26 doubles and twins, eight family rooms and five suites.

Peter Brunt concluded: “The hotels are for sale either as a package or individually and
represent a 13 year investment of time,  money and most importantly, imagination.”