Lendlease and LCR – joint venture partners of International Quarter London (IQL) – have signed an agreement for lease with Unicef UK, which will see the organisation relocate its London-based headquarters to Stratford, at the gateway to Queen Elizabeth Olympic Park.

Unicef, which works in 190 countries, is the world’s leading organisation working for children in danger. The charity’s UK National Committee will be joining Cancer Research UK, the British Council, Transport for London (TfL) and the Financial Conduct Authority (FCA), as the latest high-profile organisation to choose the £2.4 billion development as its new base of operations.

Unicef UK will occupy 25,000 sq. ft. across the top two floors of the newly built 1 Westfield Avenue building, which it will share with the FCA. Their new headquarters will allow them to embrace new ways of working, as the building boasts large open floors with flexible floorplates and workspaces offering opportunities for agile and collaborative working. Internal staircases increase connectivity between teams and break down sedentary working practices by encouraging staff to move around the building. The Unicef UK team will also benefit from excellent transport links, shopping, leisure and sports facilities, as well as significant open green spaces.

More than 300 staff will move from their previous building in Clerkenwell where they have been located for more than a decade. With TfL already established, this will take the total number of people working at IQL to more than 6,900 – a number which is set to rise to 25,000 upon completion of the entire site in 2025.

Jonathan Emery, Managing Director of Property at Lendlease said: “It’s an irrefutable fact – a person’s workplace environment has a direct impact on their well-being, performance and productivity. It makes compelling business sense then for employers to seek out the very best places for their people to work.

“International Quarter London is quickly becoming London’s new home for progressive, global organisations and some of the city’s brightest young talent. University College London and Loughborough University are based at nearby Here East. The new Cultural and Education District, when built, will be home to some of the world’s most forward-thinking cultural institutions, including the new V&A East and Sadler’s Wells Theatre venues, and London College of Fashion.”

Mark Devlin, Chief Operating Officer at Unicef UK said: “As we looked for our new home, we were attracted by the genuine community nature of Stratford and based our decision on affordability, location and design potential. The outstanding workplace at 1 Westfield Avenue will enable us to adopt more agile and collaborative working practices. In turn, this will enable our teams to operate more effectively and most importantly achieve even better outcomes for the world’s children.”

David Joy, Chief Executive of LCR said: “Securing a leading global charity such as Unicef further reinforces the high calibre of organisations that International Quarter London is attracting from across a range of sectors. Stratford is rapidly becoming an area of London like no other, and the organisations that are now looking to move here as they plan for their future, reflects the pace of change taking place and the growing appeal of the area.”

Unicef UK will begin fitting out its new headquarters from May, with its employees due to move in at the end of summer 2018. 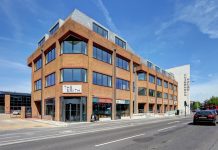