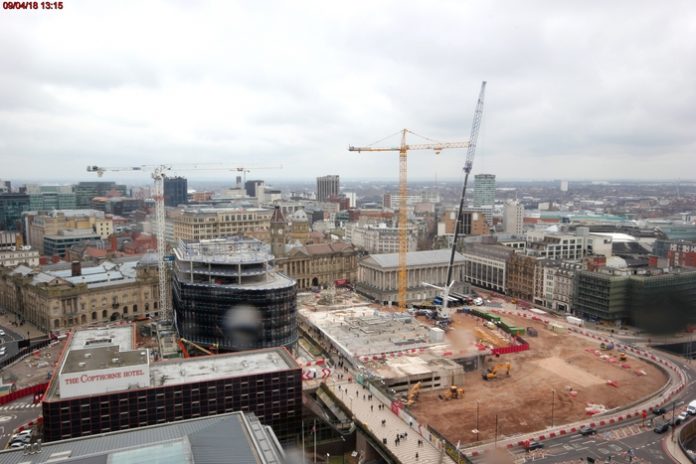 Two brand new tower cranes are taking their place on the city’s skyline as the next construction phase of Paradise Birmingham swings into action.

The second building at Paradise, Two Chamberlain Square, is currently having a pair of tower cranes installed on site to help it towards completion in 2019. It is an eight storey, 183,000 sq ft building that brings a striking, contemporary addition to Chamberlain Square. The building will have active restaurant, bar and retail usage at ground level and will offer a stunning workplace location when it completes later in 2019.

It will complete the first phase of Paradise Birmingham that also includes the 172,000 sq ft One Chamberlain Square that is fully let to international professional services firm PwC and is due for hand-over to the firm next year.

BAM Construction are undertaking the construction of Two Chamberlain Square and will oversee a team of over 200 construction workers. The two basement levels have already been created as part of the site enabling works and therefore the full frame of the new building will quickly become visible once the tower cranes are in place.

Tower Crane 4, which can already be seen towering over the city centre, is one of the largest operating in Birmingham at 80 metres in height, equivalent to 20 double-decker buses, and with ballast weight of 32 tonnes – the equivalent of six and a half fully grown African bush elephants. Tower Crane 3 will be smaller at 50 metres in height, or the equivalent of 12 double decker buses, with a ballast of 26 tonnes, or five African bush elephants. It is due to be installed over the coming week.

Rob Groves, regional director of Argent, Development Managers for Paradise, said: “The arrival of the two new tower cranes demonstrates in a very obvious way the gathering momentum around Paradise Birmingham. This is another major milestone as we move into an exciting phase of work over the next year. As well as the practical completion of our first two buildings, next year will see more of the public realm revealed for the benefit of everyone who lives in or visits the city.

Rod Stiles, Regional Director for BAM Construction in the Midlands, said: “We are already working hard to deliver Two Chamberlain Square and the two new tower cranes will enable us to accelerate construction over the next eighteen months. This is a superb building in an exemplary scheme helping to transform the heart of Birmingham with a range of new facilities including retail and leisure as well as top-class office space.”

At 1.8 million square feet, Paradise Birmingham will deliver up to ten new flagship buildings, offering offices, shops, bars, cafés, restaurants and a four star hotel across 17 acres in the heart of Birmingham.

Paradise Birmingham sits in the country’s largest city centre Enterprise Zone and has already benefited from investment by the Greater Birmingham and Solihull Local Enterprise Partnership (GBSLEP) in enabling and infrastructure works.