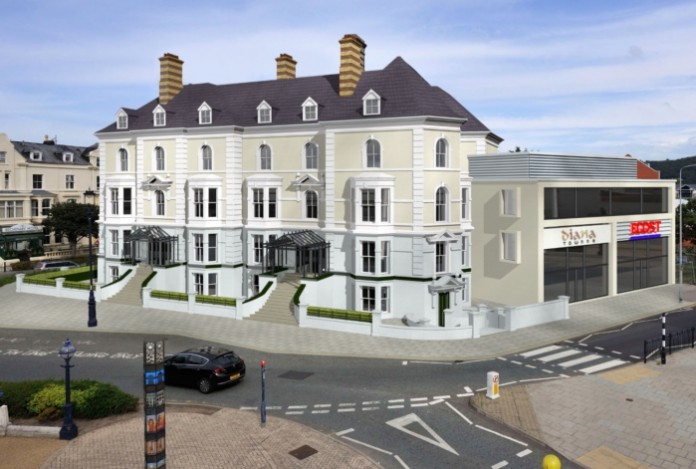 Opus North’s successful redevelopment of the historic Tudno Castle Hotel in the heart of Llandudno has received a major boost with the news that Pizza Express will open a restaurant on site.

Pizza Express has taken a new 25-year lease on a 2,800 sq ft retail unit on the ground floor of the new Tudno Point development.

Tudno Point will link the town centre to the successful 160,000 sq ft Parc Llandudno, where tenants include Debenhams, Next and Laura Ashley, and provide a strong focal point in the heart of the historic Welsh town.

Andrew Duncan, director of the West Yorkshire-based Opus North, commented: “We are absolutely delighted to be welcoming a national brand like Pizza Express to Tudno Point. This a resounding endorsement of the development and a major boost to the local economy and to Llandudno’s retail and leisure offering.”

The once-proud Tudno Castle Hotel has fallen into disrepair and has not been occupied for several years.

“Work had started on site and was scheduled to be completed by the winter of next year but, due to structural issues on the retention of the façade, work has been delayed. Further planning permission from the local authority is required, which is in the process of being formalised,” explained Mr Duncan.

“The completed development will feature a 63-bed Premier Inn, together with three new-build restaurants, namely Prezzo, Pizza Express and Beefeater. We have had strong interest in the final two units of 4,465 sq ft and 1,400 sq ft.

“With a 15-month building programme, the development is scheduled to be completed in 2019. This is a very important regeneration project for Llandudno and, both during construction and when finished, will provide a significant boost to the local economy,” added Mr Duncan.

Llandudno is Wales’s largest and most popular seaside resort, which has maintained its unique Victorian and Edwardian elegance. Mostyn Estates are the principal local landowners, having developed much of the town in the mid-19th century.

Llandudno is spectacularly located on the Irish Sea, with the Snowdonia mountain range in the distance. It is one of the most beautiful coastal resorts in the UK. The unspoiled town is popular all year round with business visitors and tourists alike.

The agents for the development are Leeds-based property consultants WSB.