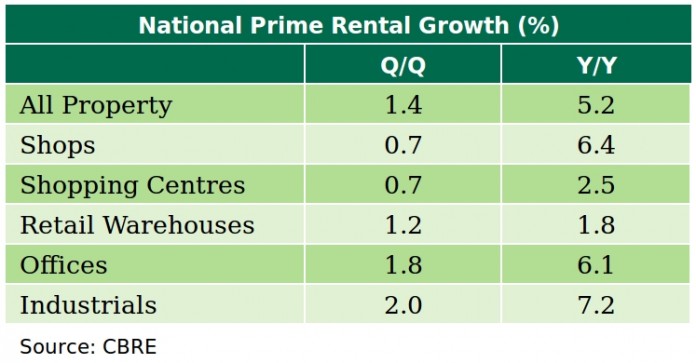 Rental values for UK prime commercial property grew by 1.4% in the first three months of 2016, matching the post-crisis high of 1.4% in Q4 2015, according to the latest CBRE Prime Rents and Yields Monitor. Boosted by the strong performance of offices, retail warehouses and industrial property, rents across the board sustained the highest level of growth since 2007.

Prime Industrial property led the way, with rental growth increasing to 2% in the first quarter, the third steepest quarterly increase the sector has seen since 2001. Yields remained flat at 6%, resulting in a capital value growth of 2.1%. Rental growth was largely attributable to the London market, where demand for industrial space has been robust. In the London industrial sector, rental and capital value growth was by 3.9% in the first quarter alone.

The prime office sector also drove up the UK average, with rental growth of 1.8% and capital value growth of 1.7%. The healthy performance was mirrored across the UK, with every region exhibiting either rising or steady rental growth over the first three months of the year. The main growth hotspot was in the West Midlands which saw rental and capital growth of 4.7%, as commitments around HS2 and a growing trend for ‘north-shoring’ increased demand for office space in the region.

Prime Central London offices again showed significant growth of 2.6% across both rents and capital values. The capital also contained most of the nation’s hotspots. Prime offices in the City saw its highest rental growth in six years at 4.6%, while London Docklands saw increases of 5.4%.

Overall, UK yields remained relatively flat in the quarter, up slightly from 5.3% to 5.4%, but remaining on a par with the average level for 2015. Retail warehouses saw the highest yield growth, resulting in an average fall of -0.8% in capital values 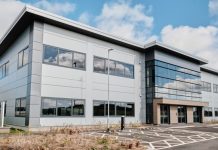 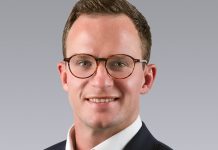