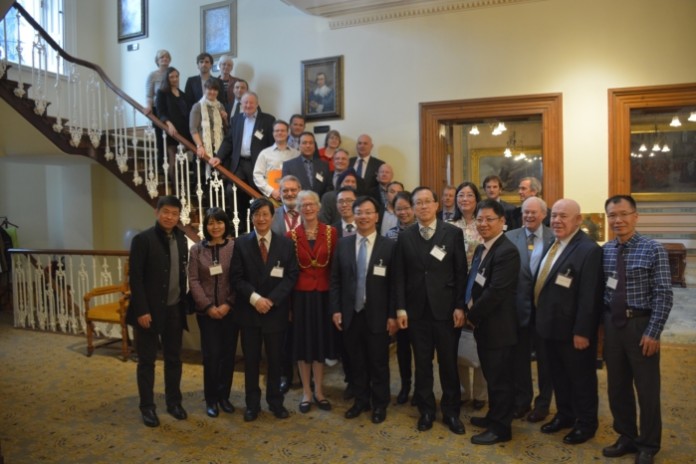 Bristol’s business partnership with Guangzhou has been further strengthened with the announcement of a major new development initiative between the two cities.

Under the terms of a new Memorandum of Understanding signed at the Mansion House in Bristol on Monday, Bristol Global Partnership will become the UK’s first representative office of the Sino-Singapore Guangzhou Knowledge City – the Chinese equivalent of California’s Silicon Valley.

The newly launched Bristol office will encourage and support businesses from all over Europe seeking to invest into the strategic gateway at the mouth of the Pearl River.

Kam Wong, Director of Bristol Global Partnership, said the Guangzhou region was regarded as China’s ‘South Gate’  –  reflecting Bristol’s position as the economic hub and gateway to the South West.

“Like Bristol, Guangzhou is very much open to business by air, sea, road and rail.”

He said the Guangzhou Knowledge City was interested in attracting big business people looking at opportunities in schools, universities, hospitals, health and hi-tech.

One of the first offices to be opened in Guangzhou Knowledge City is the State Intellectual Property Office – the first of its kind outside of Beijing.

Kam Wong felt this was a very significant step for businesses looking to establish greater presence in the area.

“Patents and intellectual property is often an area of concern for technology companies and this is being taken very seriously by the GKC. This means business people won’t have to apply for patents to Central Government. The local office should make life easier for businesses seeking to protect their intellectual property.”

He said: “I think Bristol’s close relationship with Guangzhou over the past 15 years has played a key part allowing us to set up the first Global Partnership office in the World here in the city.”

Dianne Francombe, Chief Executive of the Bristol and West of England China Partnership, said she could not have imagined Bristol would see the launch of a direct business and investment office when the city was first twinned with Guangzhou nearly 15 years ago.

“Building an economic relationship with any country takes time. We began with cultural and education exchanges and went on to organise a series of business delegations so they could see the size and extent of the market opportunities China presents.

“Now we are getting close to fulfilling the dream of the twinning experience.

“This is a fantastic step and shows how much that mutual trust and endeavour has developed.”

Nick Palmer, Sales and Marketing Director with Portishead-based DPS Process solutions has already had experience of visiting and doing business in China – especially in the waste water sector.

He said: “China is looking to move away from being the factory of the World to being the developer.    Bristol technology has a part to play in this process.

“The Sister City relationship is taken very seriously there. They value this relationship and want to make it a success in China, for China.

“We have been keen concerned with encouraging other businesses to take that path. They are particularly looking for ICT, Biotechnology, new energy and clean technology.

“We welcome the SSGKC team setting up an operational base in Bristol with a view to encouraging investment from overseas into the new Knowledge City – which is truly immense in scale.”

He concluded: “It takes time for the cultures to change on both sides. We have invested the time to visit and listen and the long term effort is starting to reap results.”