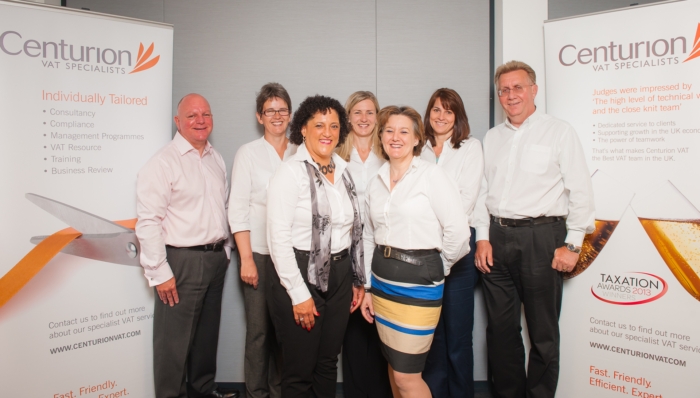 A Newport-based VAT consultancy is celebrating after being shortlisted for two awards in one day.

Centurion VAT Specialists has been named as a finalist in the national Taxation Awards and the Institute of Directors Wales, Director of the Year Awards.

Centurion has made it to the final three in the Indirect Tax Team category at the Taxation Awards, they line up alongside Grant Thornton UK and The VAT Consultancy for the highly-coveted prize. The winning entry will be announced on the night of Thursday 21 May at The London Hilton at Park Lane.

The Taxation Awards, having been introduced in 2001, have quickly become seen as a benchmark of excellence within the industry.

And there was more good news for the firm as Director Liz Maher discovered that she had been shortlisted in the Director in Small Business category of the Institute of Directors awards. The awards ceremony is held on the Friday 15 May at the SWALEC Stadium in Cardiff.

This recognition is testament to Centurion’s growing reputation within the industry, and highlights the dedication of the company’s employees.

Liz Maher, Director of Centurion VAT Specialists, said: “Being nominated for two awards is a fantastic achievement for everyone at Centurion, highlighting our high standards of service and the outstanding dedication of our team. We’re especially excited to have been recognised in the Taxation Awards again, having won our category in 2013.”

Since winning the Taxation award in 2013 Centurion has increased its client base by over 20 percent and regularly receives contact from overseas businesses looking for VAT advice on setting up in the UK, further adding to a growing client base across the UK and beyond.

Liz said: “Being shortlisted for both awards is recognition of our growing reputation across the industry and will put Centurion on the map. I’m sure this will be the first of many nominations as we continue to strive for excellence across different sectors.”

Established in 1998, Centurion’s VAT experts offer clients over 145 years of experience from across the public and private sectors. They are currently the largest independent specialised VAT consultancy in Wales.

With offices in Newport and Bristol, Centurion has ambitions to become the largest independent VAT consultancy in Wales and the South West.