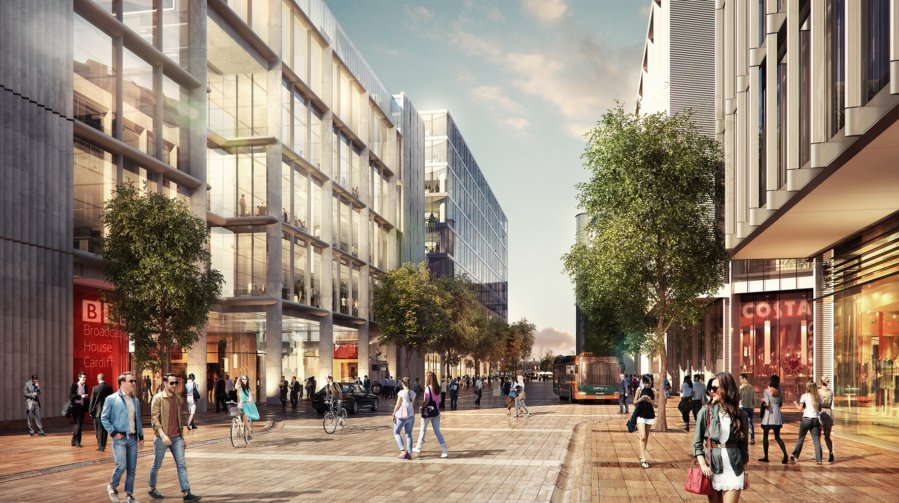 The City of Cardiff Council and its development partner Rightacres Property have released details of the proposed masterplan for the regeneration of Central Square.

The ambitious plans incorporate over a million square feet of office, retail and residential buildings around a new civic square that will redefine one of the most important gateways into Wales’ capital city and the wider city region.

Leader of the City of Cardiff Council, Phil Bale, said: “Central Square is the key gateway to Cardiff and the wider city region for many potential investors, residents and visitors, and so its role in providing a positive image for Cardiff and Wales cannot be underestimated. The Council has worked closely with Rightacres and its design team to create a masterplan that is reflective of the City’s ambition to be amongst the most ‘liveable’ cities in the world.”

The masterplan has been designed by one of the world’s leading architects, Foster + Partners, led by Senior Executive Partner Gerard Evenden, who was born in Cardiff and educated at Radyr Comprehensive and Cardiff School of Architecture.

Paul McCarthy, Chief Executive of Cardiff based property company Rightacres, said: “With Gerard’s great local knowledge and supported by his team of extremely talented architects Foster + Partners have come up with a fantastic plan. The aspiration is to create Cardiff’s premier business location that will attract indigenous businesses and inward investors to Cardiff. The new buildings will be set around a new square that is right in terms of scale and size and that is capable of being multi-functional to handle events such as food festivals and live street performances.  The main challenge for the team was to demonstrate how the new square and streets leading to it would perform during a major event such as a rugby international. Once we knew we could handle 35,000 people exiting the southern gates of the Millennium Stadium in under twenty minutes we knew the area could handle 7,000 people per hour on a normal day at peak times.”

There will be a new direct pedestrian route from the Square to the Millennium Stadium which will be known as Millennium Walkway. The street has been designed to handle large volumes of people as they make their way to, or exit, the Stadium.

Wood Street, too, has been completely revamped to create a new boulevard with high quality office buildings either side and the space is designed to accommodate the Metro as and when it comes in to play.

At the centre of the development is the proposed new BBC Wales HQ which has also been designed by Foster + Partners which, subject to planning, is scheduled for completion in 2017. There will be another half a million square feet of office space providing accommodation for the key sectors that underpin Cardiff’s economy all adjacent to the Capital’s public transport hub ensuring that employees from the wider city region can easily get to work.

Ensuring that the city centre remains accessible to workers, visitors and residents was another key challenge and the plans demonstrate how a new transport interchange including a new bus station will be incorporated into the scheme. Whilst there is no detailed concept for a new bus station as yet – work is due to begin in November – and any final decision on its location will follow the results of the public consultation held in the summer, the master plan demonstrates that a modern transport hub could be delivered on the site of the existing Marland House and Wood Street car park, both of which the Council acquired last year.

The development of the masterplan has involved over 50 stakeholder meetings working closely with organisations such as the Millennium Stadium, Network Rail, Cardiff Bus, Arriva Trains Wales, Diversified Cymru and St David’s Shopping Centre as the plans for the scheme have evolved.

Paul McCarthy said: “People have talked for many years about the regeneration of Central Square but this time it is happening. Central Square will present visitors arriving in the City with a first impression that the Capital City deserves”.

The development team liaised closely with the Design Commission for Wales on the project who are supportive of the scheme.

Carole-Anne Davies, chief executive of the Design Commission for Wales, said: “The masterplan proposals for Cardiff’s Central Square represent a catalyst for the transformation of the city’s profile and its capacity to attract further investment. The approach to the public space and integrated transport facilities is well considered and of high quality. The commitment of the development partners to an iterative, collaborative process with the Design Commission for Wales has been exemplary. A focus on design quality for deliverable proposals has characterised the project to date and, with a timely planning process and careful consideration of the detailed planning submission, it should be possible to anticipate the reality of a game changing scheme emerging very soon”.