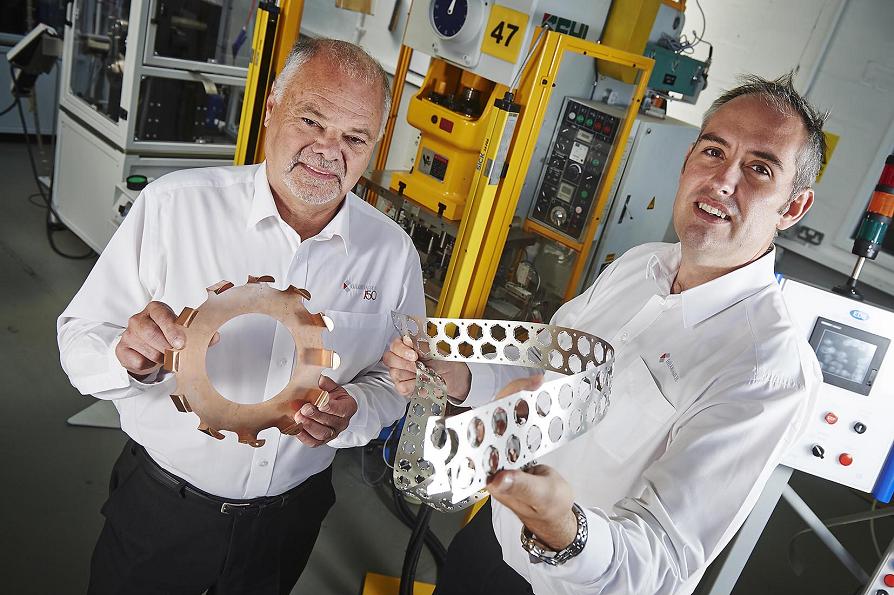 One of Birmingham’s most respected manufacturers has a new man at the helm after its well-known Managing Director stepped down to prepare for retirement.

Brandauer, which was formed in 1862, has announced that Rowan Crozier has been promoted to Chief Executive Officer (CEO), marking the end of David Spears’ successful 13-year tenure at the precision pressworker and stamping specialist.

The move will see the popular industrialist act in a non-executive position for the business, which has ambitious plans to grow sales beyond £10mand create up to 20 jobs by 2017.

At the heart of this vision is a desire to capitalise on its strength in complex componentsand engineering expertise by launching a new specialist products division, not to mention a concerted export push into Germany,Scandinavia and the USA.

“We have had a number of new business wins,which lay down the foundations for greater growth over the next three to fiveyears,” explained Rowan.

“UK manufacturing is in demand at the moment and we’ve noticed companies not only reshoring work, but previously hard to enter international markets welcoming our capabilities.”

He continued: “There’s anincreasing capacity issue in Germany for what we do, which we can solve relatively easily given the chance. We’ve also just landed two orders from Sweden and Norway and believe there is a lot more potential out there.

“We already export 75% of our turnover and I can see this growing to 80%, maybe even 85% if we take advantage ofopportunities in the EU.”

David Spears, who first joined Brandauer as an apprentice toolmaker in 1974, will remain in a non-executive capacity to help it work towards its five-year plan.

After two periods with other manufacturers he returned to the firm in 1999 as Operations Director before being appointed Managing Director in 2001.

During his thirteen-year spell he guided the company through two major recessions by creating a business that competes globally and leads through innovation and investment.

“I’ve had a great time at Brandauer, but it’s now right to hand on to the next generation and let them take the business even further forward,” explained David.

“There’s been plenty of highlights from rebuilding the firm after the telecoms crash and winning a record £2.5m one-off contract, to being a founding member of the Midlands Assembly Network and hosting the HRH Princess Royal’s visit as part of our 150-year celebration.

“As it stands Brandauer has a talented workforce, the finest equipment and a great factory… going forward these elements need gelling together by Rowan and his team to produce a diverse, world class competitive solution for our customers.”

He concluded: “The big challenge will be in taking control of the future skill requirement. There is no skills pool in the marketplace that we can tap into for ready-made engineers…it will be down to us to address this issue head-on so we can grow our own talent.”

Brandauer, which currently employs 56 people at its Bridge Street West factory, has invested heavily this year, with £800,000 spent acquiring a new wire EDM cell and, thanks to support from the Green Bridge Supply Chain Programme, £430,000 channeled into a state-of-the-art paperless business system.

The latter will increase efficiency across every area of the business and controls everything including taking the initial enquiry via CRM, supplier scheduling, factory workflow and new product introductions.

This is helping the firm continue to offer the world class standards expected by a customer base that spans aerospace, automotive, medical, plumbing renewables and telecoms.