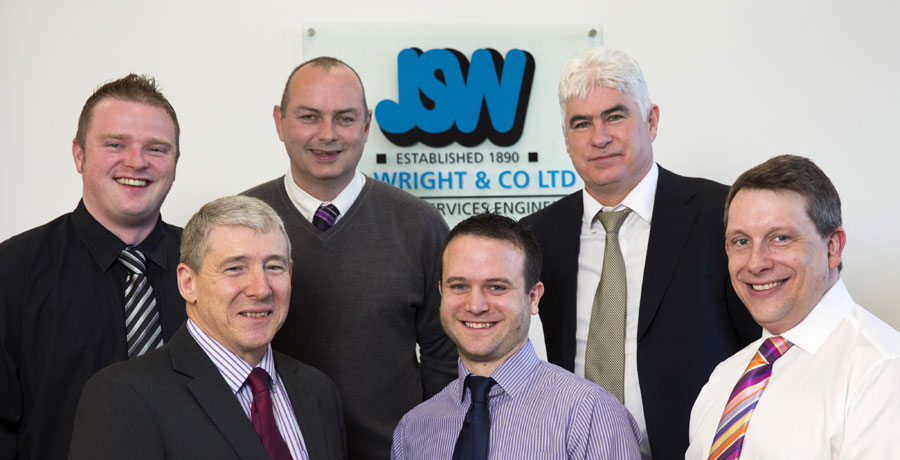 Booming business has prompted a leading mechanical engineering services provider to undergo one of the biggest organisational changes in its 124-year history.

J S Wright, which has its head office in Birmingham and an office in London, is promoting six people to a new Associate Director level to help grow the business and to reward outstanding managerial success. The promotions will take effect from May 1.

Steve Hancock, who joined the company in 2007 as a Contracts Manager, is to become Associate Director for the Birmingham Office Contracts Department. He has worked on major projects in the South East including a residential development on the site of the Seager Distillery in Deptford and the Ramada Jarvis Hotel at Hounslow.

Paul Millington, who started with the company in 1974 as an Apprentice Plumber before rising to Foreman and then Contracts Support Manager, will follow in the footsteps of his father George who also became a J S Wright director, as Associate Director working for both the Birmingham and London offices.

Toby Guise, who joined J S Wright in 2009 to manage health and safety matters, and now has the added responsibilities of managing the company’s quality systems, PAS 99 accreditation and After-Care Department, will become Associate Director for Birmingham and London.

David Cook, who has risen from Technical Apprentice to Commercial Design Manager in his 14 years with J S Wright, developing key business relationships and keeping the company abreast of technical and legislative developments, is to be Associate Director within the Design and Estimation Department.

Terence McLaughlin, currently Senior Design Engineer and Residential Design Manager, is also to be an Associate Director within the Design and Estimation Department. Having joined J S Wright as a technical apprentice more than 14 years ago, he has provided estimations and cost plans that have boosted the London client base.

Robin Thorne, who joined the company in 2011 as Contracts Manager and helped to establish its London office by delivering successful residential projects at sites such as Canada Water and the Ashmole Estate, has been promoted to Associate Director for the London Office Contracts Department.

The directors will be supported by Simon Bevin, who joined J S Wright in 2007 as a Junior CAD Technician and will take up the position of CAD Manager within the Design and Estimation Department. All the changes will take effect from May 1.

Marcus Aniol. Managing Director of J S Wright, said: “The creation of a new tier of directors has been driven by a very healthy order book and our confidence in an even brighter future. It will enable us to strengthen our management structure and ensure that our increasing workload is carried out to the highest quality standards.

“The promotions are also a fitting reward for those who have shown exemplary commitment and excellence in management over the years.”

J S Wright is benefiting from increasing growth in the construction sector, especially in central London where foreign investment in new apartments is helping to drive the UK’s economic recovery.

Marcus said: “The experience and expertise of our designers, engineers and site workers has enabled J S Wright to become the mechanical services contractor of choice for some of the biggest residential schemes in London. We have serviced more than 2,000 new homes in London, as well as luxury hotels, for leading developers.

He added: “We have been so successful that we are looking forward to achieving a 40 per cent increase in turnover to more than £25 million in our current financial year. We have already recruited a further 17 people in the past six months to bring to well over a hundred the size of our directly employed workforce.”