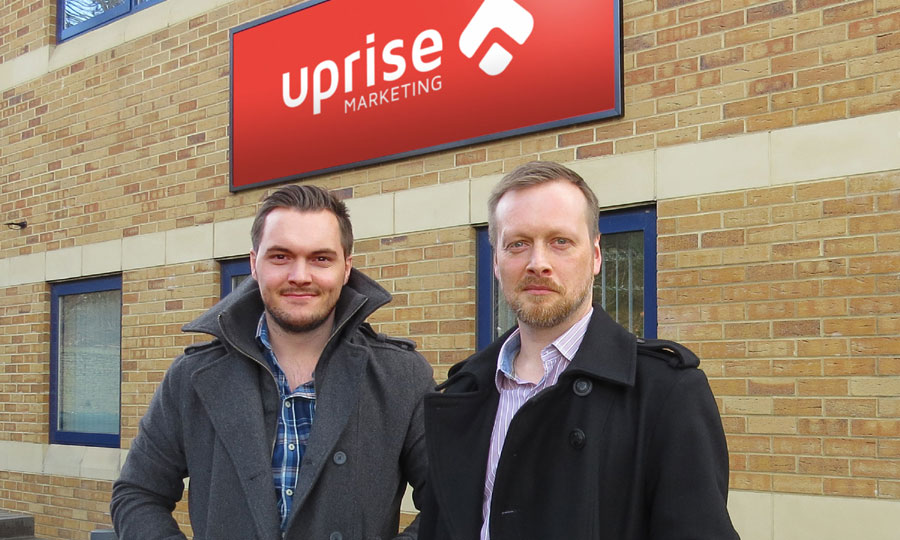 Marketing and lead generation agency, Uprise Marketing, has made two appointments to its management team. The company, which recently secured a grant from the Welsh Assembly’s economic growth fund, has appointed Leigh Taylor as Head of Content and Creative, while Geraint Manning joins as Design Director.

Mr Taylor joins the company from Real Radio, where he was responsible for establishing and managing the station’s award-winning Creative department. A graduate in Cultural Media studies from the University of Newport, he began his career as a Copywriter for Red Dragon FM before moving to Real Radio six months after the station launched, and was part of the management team when it became Wales’ first national commercial radio station in January 2011.

During his 15 years in radio he created many successful campaigns for well-known clients including The Celtic Manor Resort, Blazers Caravans and the Welsh Assembly Government. His work won several awards including Fresh, Vox and GMG Radio awards.

Mr Taylor will be responsible for leading Uprise’s copywriting team and will work alongside the agency’s online marketing team to develop and implement effective online content, SEO and social media strategies as well as working closely with Mr Manning and the design team to devise creative and direct marketing campaigns.

Mr Manning joins Uprise as Design Director from Cardiff Design Company, where he held the position of Creative Director. A graduate in Graphic Design from Swansea Metropolitan University, he has been in the design industry for over 8 years and has worked for a wide variety of clients including L’Oreal, Cardiff Blues, Tesco and the Premier League.

A Welsh speaker from Cardiff, Mr Manning will be responsible for heading up Uprise’s design team and will work in tandem with Mr Taylor to develop both online and offline creative work.

Established in July 2012 by the former Marketing & Commercial Director of The Celtic Manor Resort, Gareth Rees Jones, and the former Managing Director and co-founder of IT Software Company, FD Systems, Geoff Thomas, Uprise Marketing specialises in outsourced marketing and lead generation for SMEs. Based in Treforest, its services include website design and development, search engine optimisation, creative and design, direct marketing, strategic marketing consultancy and print services. It also offers lead generation services to companies within the B2B sector through its specialist in-house Telemarketing team.

Commenting on the appointments, Gareth Rees Jones, Managing Director of Uprise said: “It’s fantastic to welcome Leigh and Geraint on board. Having worked with both of them as a client in the past, I know how talented they are and the quality of creative work they produce. With many businesses now looking to capitalise on the growth in the economy by marketing themselves professionally, it’s an exciting time for the marketing industry. I’m sure that the appointment of Leigh and Geraint will help us in our drive to become a major UK agency over the coming years.”