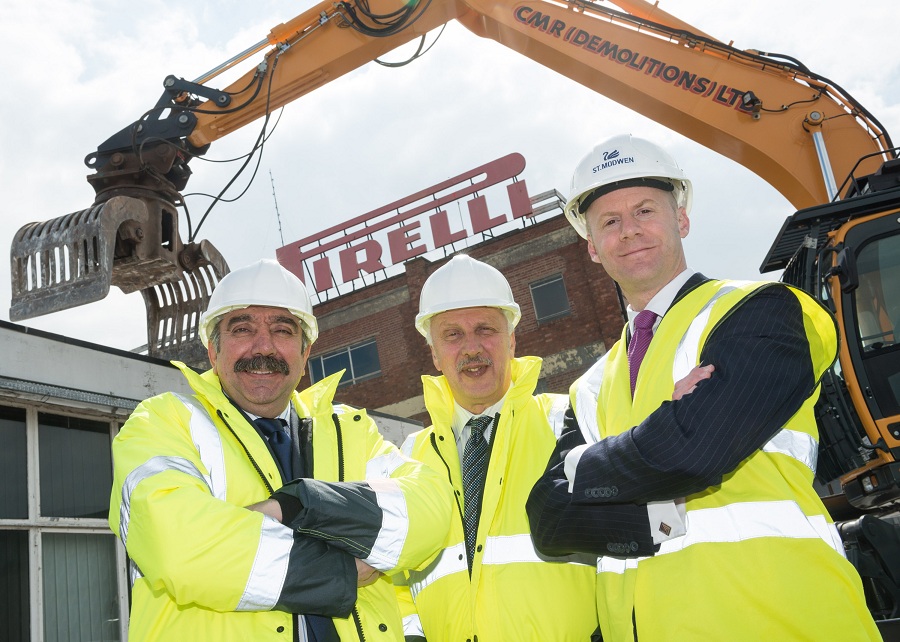 Following the sales of redundant areas of land and disused buildings by Pirelli, diggers have moved on to parts of the old Pirelli tyre factory site in Burton upon Trent, to clear the way for St. Modwen to deliver up to 300 homes and a commercial development including offices, commercial units, a public house, hotel and restaurants.

A demolition team is currently removing the disused buildings on the Princess Way land adjacent to the canal, which will be followed by the removal of the unused high bay warehouse on Derby Road. The demolition work is due to be completed by November.

Plans for the site were devised following Pirelli’s decision to sell off their unused buildings and land on the Burton site. The Head Office of Pirelli Tyres Ltd will continue to operate from the existing office block and the MIRS factory (MIRS – Modular Integrated Robotic System) both of which remain unaffected by the works although the site will now benefit from a new car park and vehicular access as part of the plans.

Ian Romano, senior development surveyor at St. Modwen, said: “We are pleased to start work on this new regeneration project which is the result of many years of planning and consultation. The scheme will deliver good quality homes, leisure facilities and generate several hundred jobs through the construction and completed development.”
Dominic Sandivasci, Chairman and CEO of Pirelli UK Tyres Ltd, stated: “The demolition marks an important moment for Pirelli and the local community, with the new development set to bring a fantastic boost to the area both economically and aesthetically.”

Located off Princess Way, the new residential area will overlook the Trent and Mersey Canal and feature a collection of three, four and five bedroom houses. A spine of internal green spaces and children’s play areas will be delivered, in addition to pedestrian and cycle linkages from the canal to the town centre and local shopping areas.

The hotel, restaurants, public house, offices and commercial units will be developed on vacant land fronting Derby Road, providing easy access to the A38 and Burton upon Trent.