Construction specialists are working hard to prepare an historic Swansea building for a smart new look – and a new life.

They’re on site at the city centre’s historic Palace Theatre building, making it ready for a dramatic but sensitive overhaul in the coming two years.

The structure was built in 1888 and, in its long history, has undergone a series of interior makeovers resulting in a complex rabbit warren with steep, winding staircases and numerous spaces of different shapes and sizes.

The challenges for those now in the early stages of rescuing the building are intensified by the structure’s derelict state after almost two decades of disuse.

Swansea Council plans a big future for the six-storey building, having taken it out of private ownership shortly before the pandemic.

Council leader Rob Stewart said: “Make no bones about it – the Palace was in a terrible state and could have been lost to Swansea.

“It was dilapidated after years of being in private hands; we rescued it when we purchased the building for the people of Swansea

“We’re transforming it with the help of specialist partners such as GWP Architecture and main contractor R&M Williams Ltd.”

Council cabinet member Robert Francis-Davies said: “The work done on site so far – to simply start making this terribly distressed old building ready for our improvement work – has been specialist and complex.

“Together – and in liaison with heritage bodies – we’re striving to restore and retain key features and to make the Palace an important location for the city’s ongoing £1bn regeneration and exciting future.”

Work on site so far has included:

Removing the huge, dilapidated roof and covering the building in temporary weatherproof sheeting – in readiness for a new slate roof

Removal for repair of original elements of the venue’s interior and exterior – including its iconic Palace Theatre main sign that, in future, will continue to overlook High Street, and a wrought iron balustrade that’ll be reinstated.

Creating a six-storey void at the rear of the building to accommodate, as part of the plans, a lift and other features making the Palace accessible to all

Removing the stage and exposing the large orchestra pit; key features will be restored.

Uncovering equipment from the theatre’s performing area and off-stage space, including gas lights; consideration will be given on how to re-use them.

“Due to the Palace’s age and poor condition, we’re encountering many challenges as we make good progress.

“Once the work’s complete, the city will have a building that’ll be a dynamic focal point for a regenerated area.”

“These historic features will complement new elements that will allow the building to be given a new life and use in the future.”

Welsh Government Minister for Climate Change Julie James said: “We want to breathe new life into our town centres and I am pleased that we’ve been able to contribute to this important project via our Transforming Towns programme.

“The Palace Theatre building will be a real asset, creating a high quality modern commercial floorspace that is desperately needed in Swansea city centre.”

The grade two listed Palace building is being transformed sensitively into a home for tech businesses, start-up and creative businesses, with Tramshed Tech to lease the building as lead tenant. 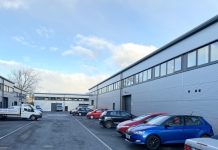