According to Colliers’ latest Industrial and Logistics research, vacancy rates reached a historic low of 3.1 per cent in Q2/Q3 2022 for units 100,000+ sq ft, pointing to an undersupplied market, even when accounting for pipelined speculative space and design-and-build opportunities.

The highly documented supply demand imbalance in the industrial and logistics sector drove UK annual rental growth to a record-high of 12.4 per cent in Q3 2022.

Colliers’ latest forecasts also reveal that the industrial sector’s leasing market is cooling and delivering an average annual rental growth of 4.7 per cent to 2026 (2022-2026).

Furthermore, according to industrial developers’ announcements and completed speculative space, the UK market will have seen a record 18 million sq ft of speculative deliveries in 2022. However, this has not been enough as Q3 UK supply remained relatively unchanged at 18 million sq ft (y-o-y), particularly when considering that Colliers’ supply figures include a total of four million sq ft of space with practical completion scheduled in Q4 2022.

Len Rosso, head of Industrial & Logistics at Colliers added: “There is currently 16.2 million sq ft of speculative supply either under construction or where developers have announced construction works to start in early-2023, however construction plans on some of these schemes may be revisited due to weaker land and capital values, which are challenging development appraisals. This figure may look high when studied in isolation but when compared in the context of five-year regional annual average take-ups it is in line with expectations. However, if we consider that this new space is skewed slightly as four million sq ft is being delivered through six units equal or larger than 500,000 sq ft, it becomes clear that investors are remaining relatively cautious in the wake of economic forecasts.”

Andrea Ferranti, Colliers’ head of Industrial & Logistics Research commented: “Developers are struggling to bring sites forward fast enough to maintain a healthy supply/demand balance. Given the economic headwinds, it is plausible to expect a slowdown in occupational demand in 2023. However, the relative lack of supply will sustain rental growth over the foreseeable future with average annual rental growth in the industrial sector forecasted to outperform other commercial real estate sectors to 2026.”

The lack of industrial development land is most acute in London where there is only 954,000 sq ft of available design-and-build space resulting in 2.5 months of supply (m-o-s). The Scottish market came in second with only 14.1 m-o-s; followed by the West Midlands (14.3 m-o-s); the South East/Eastern (14.9 m-o-s); the North West (22.1 m-o-s); the South West (22.9 m-o-s); East Midlands (31.6 m-o-s); North East (30 m-o-s) and Yorkshire (35.9 m-o-s). It is worth noting that the Yorkshire figures are being skewed by 4.2 million sq ft potential design-and-build space at Humber International Enterprise Park, Port of Hull, which is expected to also attract requirements from the renewable energy sector. When excluding this space, the region delivers just below 26-months of supply.

In terms of supply, the London market has only 9.3 months of supply (m-o-s) when total pipelined space (Speculative development and design-&-build space) is compared against the market’s five-year annual average take-up. The West Midlands has 15.3 m-o-s with the Scotland, the South East/Eastern and North West markets recording 16 m-o-s, 21.4 m-o-s and 25.7 m-o-s respectively. 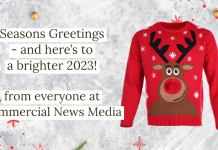 Seasons Greetings to all our readers