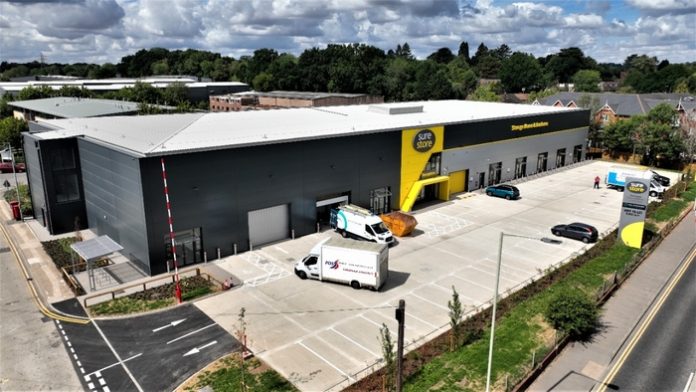 Triton Construction has completed a multimillion pound contract to deliver a new 80,303 sq ft Sure Store facility in Wokingham. The contract for expanding self-storage company, Flexiss is the third for Triton following the successful delivery of new build facilities in Wigan and Ashton-Under-Lyne.

The project represents the first venture for Flexiss in partnership with the Industrial Property Investment Fund (IPIF) for Legal & General which owns and funded the development. The partnership seeks to identify and build out best in class facilities with Wokingham being the first.

Established in 2016 by industry entrepreneurs Mike Wilson and Andy Wood, Flexiss is a managed storage group offering traditional storage and business start-up support services under the Sure Store brand. It already has ten stores in Bolton, Cannock, Northwich, Bury, Lichfield, Stafford, Wigan, Burton, Manchester, and Ashton-Under-Lyne and has plans to expand further with sites acquired in Southport and York as well as Wokingham.

Triton completed the demolition works of an existing unit on the 1.5-acre site on Molly Millars Lane to deliver a new four-storey modern facility to the same design criteria of the Wigan and Ashton-Under-Lyne sites that Triton delivered last year. Working alongside architects C4 Projects, Triton provided full design, construction and fit out services as well as external car parking and landscaping.

“We are pleased to complete our third contract with Sure Store which is proving successful in its UK extension. Our credentials in building storage and warehouse facilities that stand out from the ordinary are strong and we look forward to working with Sure Store to deliver further new developments.”

Triton Construction is a £65 million turnover company providing design and build, civils, fit out and refurbishment services. Established for more than 16 years it employed over 80 people across offices in the Northwest and Yorkshire.

Other project highlights for Triton include the ongoing Premier Inn hotels, a new testing facility for British institution and gear engine pioneer David Brown Santasalo, and the sensitive refurbishment of the iconic Royal Liver Building in Liverpool.