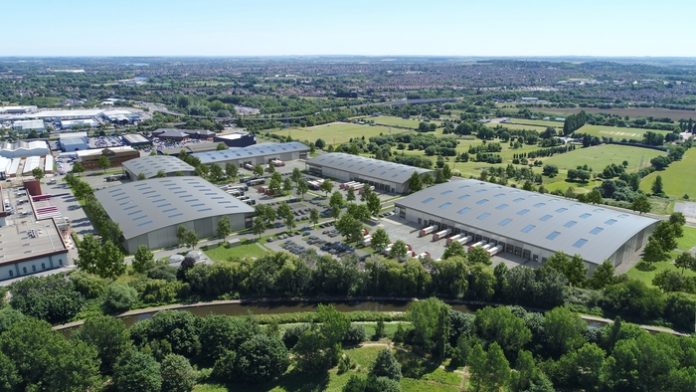 New Horizon is a landmark 28-acre site in Nottingham, part of the former Imperial Tobacco plant. The redevelopment will see the delivery of seven new industrial buildings up to 145, 000 sq. ft., all of which will be developed on a speculative basis.

The development secured outline planning consent in 2019. Now, detailed plans have been submitted to Nottingham City Council for permission for go-ahead at the site.

HBD is aiming to start on site early next year, with completion expected in Q1 2023 following the earlier demolition of the Imperial Tobacco factory.

The developer has repurposed or recycled more than 90% of the original structure throughout the redevelopment of the brownfield site. The team has used various techniques to reduce the scheme’s environmental impact, such as the crushing and reuse of concrete from the old building.

Justin Sheldon, Director and Head of Region at HBD, said: “This is a major scheme for Nottingham – it will not only bring a disused brownfield site back into use, but could create up to 1,000 new jobs.

“New Horizon is a very well-located scheme and the new units will help to meet established demand for industrial stock in the Midlands, which remains in very short supply.”

Lorraine Baggs, Head of Inward Investment at Invest in Nottingham, said: “Developments like New Horizon play a vital role in ensuring that Nottingham has the right space to attract businesses into the city, while also regenerating and restoring life to our old industrial sites and creating much-needed new jobs. This is a fantastic scheme and we look forward to seeing it take shape early next year.”

New Horizon is one of several large-scale industrial and logistics schemes underway across the country, including Phoenix 10 in Walsall; a 44-acre regeneration scheme believe to be the largest undeveloped brownfield site in the Black Country.