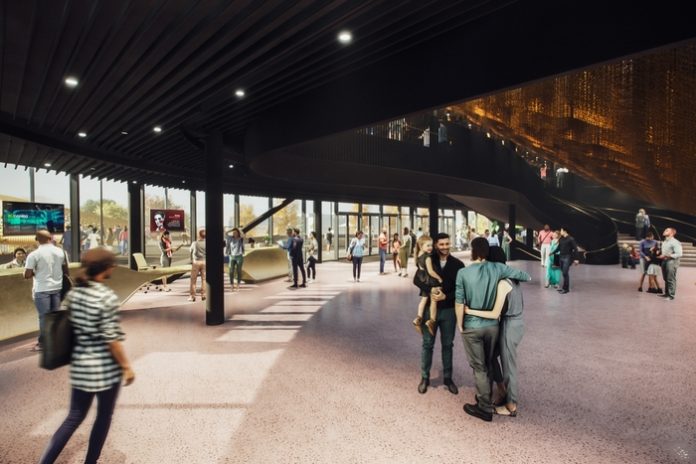 The striking new visuals introduce audiences and businesses, across Swansea, South Wales, and beyond, to the statement design and striking architecture of the upcoming venue, showing how it is situated within the inviting £135m Copr Bay Phase One development, and highlighting the coastal park and LED facade.

Also featured is the contemporary new pedestrian bridge, designed in collaboration with local artist Marc Rees and award-winning architect group ACME with references that celebrate the city’s heritage, including cut-out swan motifs that reflect the light.

The new visuals show the interior of Swansea Arena for the very first time, including how the different configurations for the multi-purpose venue will work for the wide range of events it will host.

Swansea Arena is a brand-new waterside 3,500 capacity indoor arena, located just a short walk from Swansea Beach, Swansea Marina and Swansea city centre, with up to 10 dedicated meeting rooms, a divisible auditorium to create separate spaces with the upper level transforming into a conference space for up to 750 people, a 175 capacity VIP Lounge, 9 F+B outlets within the arena and a kitchen with capacity to provide for banqueting up to 750 people.

The game-changing venue is expected to host 160 performances across music, comedy, theatre, esports and conference events for an estimated 230,000 visitors each year. Around 60 of the events will be exhibitions, conferences, graduations and other business led events.

ATG is committed to becoming a key part of the community, creating employment opportunities for Swansea and developing the local talent pool, educating and supporting talent via training, tours and career talks. Swansea Arena will integrate into the already established music and comedy scene in Swansea, and looks forward to developing lasting relationships with organisations and individuals in the region.

The brand-new tech installed at Swansea Arena ensures that the venue is equipped to host both real life and hybrid events, embracing the current trend for virtual attendance that will continue beyond the pandemic.

The Copr Bay Phase One project – worth £17.1 million a year to Swansea’s economy – is being developed by Swansea Council and advised by development manager RivingtonHark. Earmarked for completion in the autumn of 2021, its construction is being led by Buckingham Group Contracting Limited.

Swansea Arena General Manager, Lisa Mart says “Swansea Arena is a real game-changer for promoters, and for touring companies as well, because they’ve never really had access to this part of the country before. We are a multi-purpose entertainment venue, so although the majority of our bookings are going to be music acts, we are also going to be having comedy, premium musical theatre, and things like esports, gaming and even wrestling because the flexibility of our venue means we can play things in the round. Swansea Arena is limitless in terms of all the things it can offer.”

Cllr Robert Francis-Davies, Swansea Council’s Cabinet Member for Regeneration, Investment and Tourism, said: “The Swansea Arena is going to be an iconic attraction at the heart of the city’s emerging new Copr Bay Phase One district, with construction on track for completion in the autumn.

“Excitement is already starting to build with more and more visible progress on site every day, but this stunning digital fly-through will help further raise anticipation throughout Swansea and beyond. It shows how the arena – once complete and operational – will be a world class facility that will give local people the opportunity to enjoy the very best entertainment, conferences and other events.

“Copr Bay Phase One is also worth hundreds of jobs to local people, with the investment having sparked considerable private sector interest in our city. Schemes of this nature – in combination with many others – will transform Swansea into one of the UK’s best cities to live, work, study and visit. They also mean Swansea’s economy is in a strong position to quickly recover from the economic impact of the pandemic.”

The development of the Arena will be a significant landmark within Swansea’s city centre and its £135 million transformational Copr Bay Phase One project, which is being delivered by the Council working alongside development manager RivingtonHark.

Swansea City Centre is one of the largest urban transformations currently being delivered in Europe; over £1billion is being invested across the city, allowing Swansea to realise its potential to be one of the most vibrant places to live, work, visit and study in the UK.

The arena also forms part of the Swansea City and Waterfront Digital District project which is being part-funded by the £1.3 billion Swansea Bay City Deal. 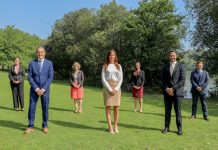 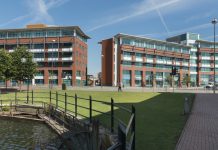