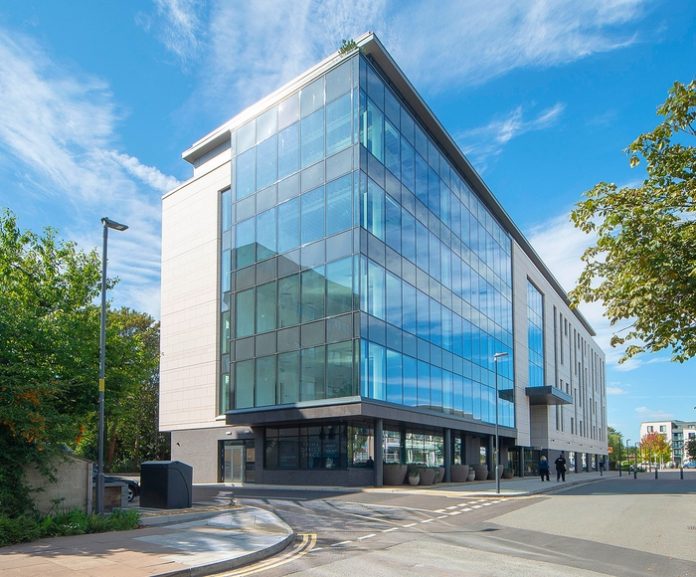 Cheltenham’s Honeybourne Place has been named the best new commercial workplace in the South in the prestigious British Council for Offices [BCO] Awards.

The office development on Cheltenham’s Jessop Avenue won the category for speculative new buildings in the South of England and South Wales. It now goes forward to the national awards to be announced in January 2021.

Developed by Cheltenham-based Formal Investments, Honeybourne Place has 63,000 square feet of office space across five floors in a sustainable design featuring solar control glazing and shading plus renewable energy from photovoltaic panels. It is already 82 per cent let.

Another Formal Investments development was also recognised in the BCO Awards. Formal House, at St Georges Place in Cheltenham, was a finalist in the Refurbished/Recycled Workplace category.

The BCO said that in Honeybourne Place “a winning combination of entrepreneurial flair and great design has demonstrated that new commercial workspaces can be successfully developed outside the main regional centres”.

The BCO judges admired “the way in which the developer and architect used their extensive local knowledge to create a cost effective and flexible building that oozes quality and attention to detail”.

Formal Investments director Nicholas King said: “We are thrilled that Honeybourne Place has won a BCO award as one of the very best office developments in a region that stretches from Kent to Cardiff and beyond and includes major commercial centres such as Bristol and Reading and the Thames Valley which is a vastly greater budget area to be up against.

“It was always our ambition to create such a first class modern and ambitious development in Cheltenham and it is thanks to the excellence and commitment of everyone involved that we brought Honeybourne Place to life in such style, an achievement now celebrated by the BCO.”

The architect of Honeybourne Place was Roberts Limbrick of Gloucester, the contractor was Barnwood Construction of Gloucester and the interior designer was Yiangou Architects of Cirencester. The lettings agent is THP Chartered Surveyors.

Aled Roberts, a director at Roberts Limbrick, said: “We are proud to have been involved in this superb new build office development from the outset and for our design to be recognised with a BCO award. Honeybourne Place raises the bar in terms of quality and flexibility.”

Simon Carey, group CEO of Barnwood Construction, said: “We are very proud to have constructed this award-winning development. The standout quality of the finished building is a testament to everyone involved.”

Paul Ainsworth, senior interior designer at Yiangou Architects, said: “The client’s brief was to ‘put people first’ and create a personable space. Offices tend to be quite internal spaces and we really wanted to connect with the outside. Inspired by the surrounding trees, we have used materials such as stone, natural timber, aged brass and leather, with luxurious green velvets and even a fire to create a welcoming, pleasant and memorable space.”

Honeybourne Place is named to reflect the history of the Honeybourne Line that linked Cheltenham’s St James Station with Honeybourne in Worcestershire and onwards to Stratford.