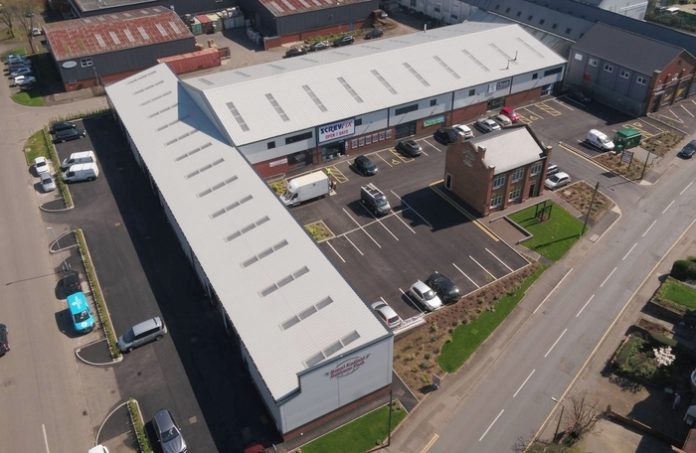 Property agents John Truslove have clinched another lockdown deal with the sale of Royal Enfield Industrial Estate to Redditch Borough Council for £2.75 million.

Ian Parker, joint managing director of John Truslove, praised the council for taking the long term view and acquiring a valuable property and employment asset for the town.

The freehold investment totals 25,546 sq ft and includes 11 industrial or warehouse units and one detached office.

The estate is fully let, with tenants including Screwfix and lithium ion battery suppliers Fogstar, producing a total annual rental of £200,162.50, for a yield of 7.23%.

Ian Parker said: “Royal Enfield Industrial Estate was a speculative development by local company EDR Developments Ltd who began construction in 2017 with completion in 2018, so it is a very new asset to the Redditch.”

John Truslove acted for EDR Developments, having originally marketed and fully let the estate to a mixture of bluechip tenants and local businesses.

“This is an ideal mix for a local authority investment and displays great confidence in the local economy, despite the current uncertainty.”

Redditch Borough Council’s Leader Cllr Matt Dormer said: “We are committed to unlocking Redditch’s potential and this purchase demonstrates that we are confident in the future economy of our borough especially with the prospect of Amazon coming here in the near future.

“Local Government has to work differently against a backdrop of reduced funding and in response this council pledged to make sound investments to support regeneration in the borough. This will support businesses and ensure that the council can realise funding so we can continue to provide top notch, frontline services which benefit everyone.

“Thanks to the hard work of our officers, this purchase, has come to fruition and is just the start of this council’s portfolio of success to continue to support regeneration in our area.”

The estate is built on the original site of the legendary Royal Enfield factory which originally produced parts for the Enfield rifle and then, from 1909 manufactured the iconic motorcycles, as well as bicycles, lawnmowers and stationary engines.

During World War 1, Royal Enfield supplied the War Department with consignments of motorbikes fitted with sidecars capable of carrying stretchers. Other versions featured a Vickers machine gun sidecar attachment which could also be turned skywards and used against low flying aircraft.

Royal Enfield was loved, and continues to be loved, by enthusiasts, famed for the Royal Enfield Bullet, the longest-lived motorcycle design in history.

But, as with much of the British motorcycle industry, Japanese competition sent the company to the wall. Production of motorcycles ceased in 1970 and the original Redditch, Worcestershire-based company was dissolved in 1971.

However, the bikes were also being made in India and this remains the case today. Enfield of India continues producing the “Bullet”, and began branding its motorcycles “Royal Enfield” in 1999. It now supplies models across the world.