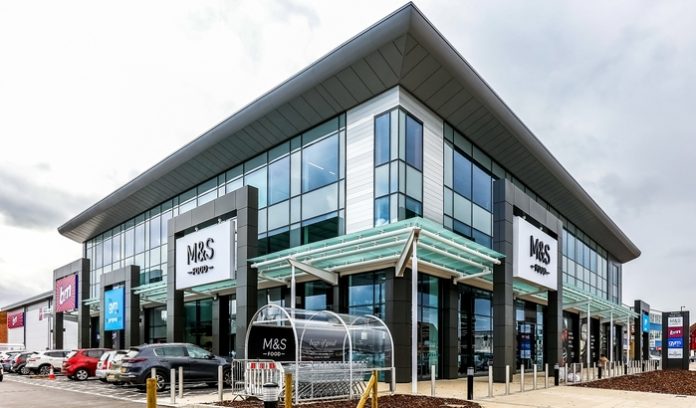 The former Severn Trent Water site on Coventry Road has been transformed into a 27,000 sq ft retail space, with a Marks & Spencer food store, B&M Bargains and The Gym Group.

Altogether, there are five retail units, all with full-height glazing and external canopies, on the phase two development, between 3,483 sq ft and 18,646 sq ft in size, plus a car park with 582 spaces.

Paul McKenna, Group CEO of the mac-group, which is headquartered in Dublin, Ireland, said: “It’s great news to have completed the building works for this retail park in Sheldon. We’ve delivered a very high quality development for Chase Midlands Estates, which enhances the local retail offer and provides much-needed facilities for the area that will attract shoppers from across the area.”

Tim Haslam, from Chase Midlands Estates, added: “I am very pleased with the first class retail facility mac-group have delivered for us at Sheldon Retail Park. The team were proactive and flexible in their approach and worked collaboratively with all stakeholders to ensure this quality project was delivered to the satisfaction of all parties.”

In the summer, mac-group moved into newly expanded offices in Station Road, Solihull, quadrupling its space as it focuses on expanding its operations in the region. Since the company first moved to the West Midlands in 2017, it has grown from just seven members of staff to over 60.

Among the projects mac-group is working on are: a 60,000 sq ft refurbishment and new-build extension at Unilever, Burton on Trent, worth £13m, and the £4.5 million One Blythe Gate office refurbishment for IM Properties.