Dave Robinson, Partner, Logistics & Industrial at Cushman & Wakefield in Leeds, commented: “Despite the business uncertainty caused by the ongoing Brexit situation, the logistics and industrial market has continued to outperform other sectors. The structural changes in the retail sector and the increasing focus on supply chain efficiencies are just two of the key drivers which give us confidence that market demand will remain robust.”

He continued: “The Yorkshire industrial market is performing well. There has been a drop off in the total number of enquiries, but take-up is still strong. The market for prime opportunities remains strong from developers, investors and occupiers and, whilst there have been some speculative development announcements that will impact on availability, total supply is still less than the one-year average take-up rate and we expect to see continued rental growth for the foreseeable future.” 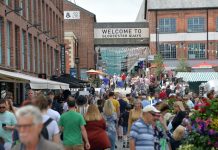