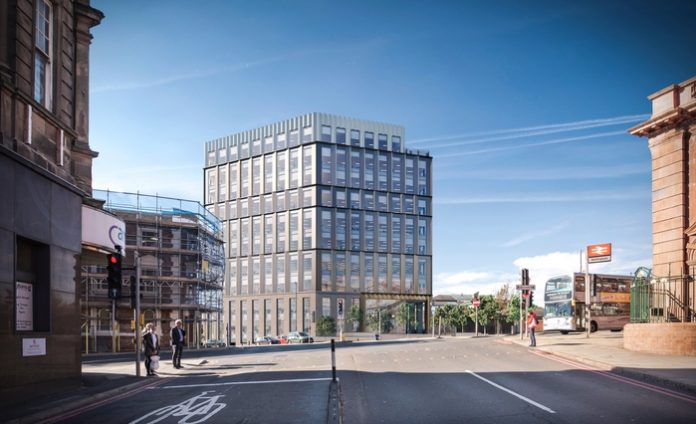 HM Revenue and Customs (HMRC) has announced it is to move to Nottingham’s Unity Square. The announcement has been applauded by the local business community – and the developers behind the Unity Square scheme say that the new regional hub will “help to put Nottingham on the occupier map, helping to secure Nottingham’s place as a Core City.”

The Unity Square development opposite Nottingham Train Station is with Nottingham City Council for planning approval, and HMRC has entered into a 25-year pre-let on the development for its Nottingham Regional Centre with Peveril Securities and its joint venture partner Sladen Estates. It is set to open in summer 2021 and Phase 1 will accommodate around 4,000 full-time equivalent employees.

HMRC’s decision to place its East Midlands and 13th regional hub in the heart of Nottingham shows the Government’s confidence in the city and, more importantly, the ability of the development team and Nottingham City Council to deliver – above other locations which could have been in the running, says Nick Sladen, chief executive of Sladen Estates.

Sladen has described the Unity Square development as “the most transformational office development scheme to happen in the East Midlands in more than a decade.”

Ralph Jones, MD of Peveril Securities, said: ““For HMRC to choose Nottingham is hugely significant for not just the city, but for everyone who lives and works here.

“In addition to this, we also believe that such a significant investment in the city and provision of an ultra-modern state of the art office building that would be at home in any major city will be a catalyst for the wider regeneration of the Southside area and will send a strong message to national & regional occupiers that Nottingham is open for business.

Nick Sladen added: “Modern occupiers now require large floorplates to suit their working practices, as Nottingham’s Grade A office stock is limited and there are no buildings that offer large floorplates, HMRC considered a purpose-built solution in the city which is why Unity Square is perfectly placed.

“Prior to agreeing terms it is also important to note that Nottingham City Council has been working closely with all parties to enable this move and their support has been instrumental in demonstrating to HMRC that Unity Square is a deliverable scheme. The city needs to rejoice in HMRC’s decision to take Unity Square as its regional hub.”

HMRC and the Government Property Agency instructed JLL to undertake a comprehensive search of Nottingham, and the Unity Square development was found to be one of the most suited and cost effective.

Matt Smith of JLL said: “It’s very satisfying to help secure the deal on a new government hub for the East Midlands, which will generate jobs and become a new landmark in the city.

“We undertook a detailed search of suitable sites that could be brought forward to match HMRC’s requirement. Peveril and Sladen Estates set out a strong case in terms of delivery team, funding and planning status and they understood the requirements of large corporate occupiers looking to be located in the city centre.

“If Nottingham is to benefit from further large-scale occupiers exploring decentralisation or consolidation, it is essential we are creating deliverable office development opportunities which set the bar high for Nottingham and ultimately help ensure the future economic growth of the region.”

The eagerly anticipated scheme will advance the £250 million Southern Gateway regeneration project. In three years’ time, the landscape around the train station will take a totally new look – with a business district surrounding the HMRC hub within an area of the city in need of redevelopment.

The planning application, encompasses two office buildings – the first being ten storeys and the second being 13 storeys high. The build will be in two phases with landscaping and an attractive urban space connecting Unity Square and the station, creating a stunning entrance to this part of the city.

HMRC’s move to Unity Square is a “giant step forward” to putting Nottingham at the core of the East Midlands in terms of office development, added Jones. Building is likely to commence early in 2019. The contractor is Bowmer & Kirkland.

Jones said: “There is significant long-term investment in this area of the city. Nottingham Train Station was the catalyst and coming up is intu Broadmarsh’s forthcoming redevelopment along with other significant schemes expected over the next couple of years.

“It is an exciting time for Nottingham with many significant schemes on the horizon and cranes expected on the Unity Square site in the next 12 months.

“Looking ahead, HMRC will be at the heart of this regenerated area of Nottingham, allowing them to take advantage of the multitude of local facilities and excellent transport links.”

Sladen continued: “Now that the existing buildings on site have been demolished, it is possible to see the huge potential for not just this site, but for the city as a whole.

“With thousands of people set to work in the HMRC’s offices in Unity Square, we see ourselves as helping bring forward an entirely new business community – breathing new life into the southern gateway – and boosting Nottingham’s economy.

“There will be significant job creation of construction personnel up to and during the build programme, and once complete local eateries and shops will benefit from the hundreds of people working there.

“Unity Square will benefit from Nottingham’s superb transport links – bus, train and tram -and it will create a magnificent backdrop for commuters arriving into Nottingham Station – providing the sort of dynamic surroundings you’d expect to see as you step from the train in one of the UK’s Core Cities.”

Legal & General has agreed to forward fund the construction of the development on behalf of Legal & General Retirement, which invests in high-quality, long-term UK assets to generate income streams that match its commitments to pensioners and deliver infrastructure funding which benefits the UK’s economy.

Gordon Aitchison, director, investments and development at LGIM Real Assets, said: “This is a great deal for us and will have a meaningful impact on Nottingham, creating new jobs and driving economic growth. This deal is the latest in a line of successful acquisitions of such Government backed investments and serves to make a valuable contribution towards matching our continued appetite for secure long income investments.”

Lorraine Baggs, head of investment at Invest in Nottingham, said: “The scheme indicates the growing confidence in Nottingham as a city which is ripe for both occupiers and developers and we anticipate other substantial interest over the months to come. 2019 is gearing up to be a momentous year not just for Nottingham’s regeneration plans as a whole, but for this area of the city to considerably advance its landscape.”