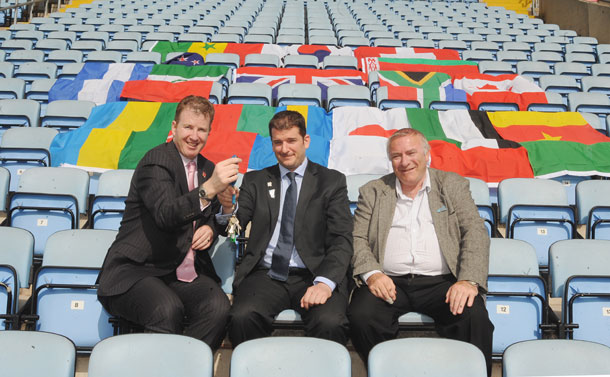 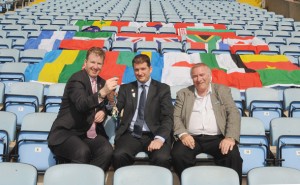 The City of Coventry Stadium has been officially handed over to the London Organising Committee for the Olympic and Paralympic Games (LOCOG).

Fourteen nations will be represented when the Olympic Football tournament kicks-off in the city on Wednesday, July 25 with a double-header between Japan and Canada followed by Sweden v South Africa.

Russell said preparations were on track for the opening matches which were two days before the Olympic Games Opening Ceremony in London.

“This is a fantastic stadium and we have been made to feel really welcome by everyone in the city,” he said.

“The exterior signs around the venue have started to be covered up to transform this into a clean stadium and security points are being constructed in the car-parks at the north and south entrances.

“LOCOG staff have been on-site for months to ensure the transformation from the senior management team was a smooth process and that has certainly been the case.”

“Seeing the flags in the stadium of the different countries who will be heading to Coventry underlines the global stage we will be involved in,” he said.

“This will be a really proud moment in our history and we are honoured to be the only Midlands venue to have been chosen to host an Olympic event in any sport or discipline.”

Cllr Mutton added: “It will be wonderful to welcome the representatives of all the countries whose teams are playing in the Olympic Football tournament in Coventry.

“This will really put Coventry on the world map from a venue and city perspective and we are all counting down to the days to when the first ball is kicked by Japan or Canada.”