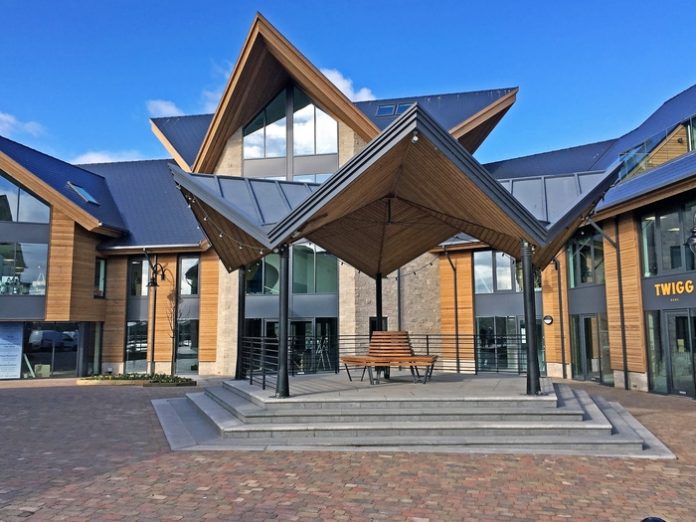 An entrepreneur is set to bring a Scandi influence to Derbyshire when he expands his retail empire by opening a fourth store at Mercia Marina – the first to open in the new landmark £3m Piazza development.

Twigg Home will open on Friday, March 2nd and is owned by Steve Robinson, who employs 40 staff in his shops in Iron Gate in Derby, Burton, Barton Marina, Belper, Ashby de la Zouch and three stores on the Boardwalk at Mercia Marina in Willington.

His existing shops focus mainly on fashion and accessories but his new venture in the Piazza will be a lifestyle store selling homeware and clothes. Currently his shops at the marina include White Finn, Molly & Co and Blue Water.

He said: “We will be focusing on fashion and homeware that has Scandi influences but also brands that carry an ethical theme.

“We have spent time travelling and studying the brands and products that you’ll see in Twigg Home, these range from soft furnishings, cushions, throws, candles or Japanese aromas. Twigg was built around the comfort we find in the outdoors and home so it felt important for us to sell air plants which don’t need soil to grow and give even the smallest spaces the feeling of outdoors. We are also stocking a organic skincare range with incredible scents from Sweden, jewellery will also be available again with a focus on Scandinavian simplicity.

“The design of the store was the most important feature for me as having a background in graphic design meant I was keen to display all the brands and roots of Twigg Home. We used reclaimed materials and rustic features along with bright bold colours and simple shelving to create Twigg Home’s unique look.

“I have a massive love of the ocean and for British wildlife, combining this with the Scandi look is what makes Twigg Home unique and I suppose it’s just about educating people as to what it’s all about.

“I am confident that this store will be a success here. There is an incredible amount of footfall all year round the Piazza building is fantastic. It’s a great destination there really is nowhere else like it.”

Twigg Home will tap into Hygge, a Danish concept of feeling comfort, cosiness, charm and joy which is often associated with spending time with family.

For Steve, of Belper, his family is a vital part of his business. Son Luke, 26, will run Twigg Home while his wife Rachel manages Start & Treymayne in Burton and Molly & Co at Mercia Marina and daughter Sophia, 28, is responsible for the online and social media side of the business.

Steve, who is originally from Findern, said: “We are all in it together and sometimes we do have to draw a line because our conversations tend to turn to work but it’s what we enjoy.”

As well as opening Twigg Home, Steve also has plans for a knitwear collection to sell in his Blue Water stores and he is looking for mills locally that could produce this for him.

He said: “I don’t think I’ll retire. If Twigg Home takes off then we would look to expand and open more stores. I love Devon and I would love to open a shop there.”

Robert Neff, General Manager of Mercia Marina, said he was thrilled that the first store in the Piazza was set to open and that Steve had chosen the marina as the venue for Twigg Home.

He said: “The Piazza is a landmark building in the heart of South Derbyshire that not only looks spectacular but also fits in perfectly within the natural environment of the marina. We are delighted that Steve has chosen to open his fourth store here and we are sure that Twigg Home will be a great addition to the selection of shops that we already have, giving visitors to the marina even more choice.”

David Gaskin, Director at Derby-based Davlyn Construction, which was the principal contractor for the Piazza build, said they were extremely proud to have been involved in the build.

He said: “The construction has been extremely challenging due to its innovative design and the restrictions of the site but this has not reduced the quality of the finished building which we are confident will be enjoyed by all its future visitors and tenants. The site is already a popular destination and we would like to wish Mercia Marina all the success that we hope this new development will bring.”

Darryn Buttrill, Practice Director at bi Design Architecture, said: “bi Design Architecture are very excited to be involved in the Mercia Marina development, especially the now completed Piazza building. We designed the building to complement our original Boardwalk building which received a Local Authority Building Control award for the best small commercial building in the UK in 2015.

The buildings are unique and striking and have created a landmark development for the South Derbyshire area, which is great as we have been based in Repton for 20 years and are very proud of this local project.”