The firm’s 2018 UK Regional Cities Office Market Review revealed that investment in Edinburgh and Glasgow reached £864 million, well above the 10-year average. While total investment dipped slightly in Edinburgh (-8%), a fourfold increase was experienced in Glasgow (+313%).

The number of investments remained at a similar level to 2016, yet the value of transactions increased, with 13 deals in Edinburgh and Glasgow worth £25 million or more. In Glasgow, 82% of the investment was placed in the final six months of the year.

In Edinburgh, prime office yields came under pressure at the end of the year in the region of 5.00%-5.25%, however, in contrast, yields in Glasgow remained steady at 5.50%.

Overseas investment accounted for almost half of all transactions in Edinburgh and Glasgow, recording 46% and 47%, respectively, despite the return of the UK investor.

In the occupier market, performance also remained strong throughout 2017. Transactions were well above the 10-year average in both Edinburgh (+32%) and Glasgow (+19%), demonstrating the continued strength of occupier demand. A total of 781,900 sq. ft. was transacted in Edinburgh city centre across the year and take-up reached 633,700 sq. ft. in Glasgow city centre.

New Grade A availability fell dramatically in 2017, particularly in Glasgow, with only 61,000 sq. ft. available at the close of the year – 78% below the five-year average for the city. Reflecting this trend, and the demand for quality space, the three largest deals in Edinburgh were pre-let agreements.

Alasdair Steele, Head of Scotland Commercial at Knight Frank, said: “Overall, the Scottish commercial property market has remained resilient, with investment volumes much higher across Edinburgh than the 10-year average. There is strong demand from investors, particularly for prime assets.

“The acquisition of New Waverley in Edinburgh for a purchase price exceeding £100 million by Legal and General is a perfect example. It was the largest investment transaction of 2017 and indeed, represents the biggest single office sale in Edinburgh on record.

“Overseas investment accounted for a substantial proportion of deals in 2017, yet, encouragingly, we also saw the return of the UK buyer.

“Demand for Grade A office space in Glasgow remains extremely strong, and despite several political distractions in the last year, the city performed well. Office take-up was 19% higher than the 10-year average, which is a positive sign for investors.

“As the story has been for some time, demand is far outstripping the supply of Grade A office space in Glasgow’s core, with only 61,000 sq. ft. available at the close of 2017. We estimate this year to be characterised by greater competition for better quality space and it’s looking likely that rents will rise by around 5%, reflecting this trend.” 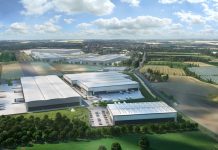