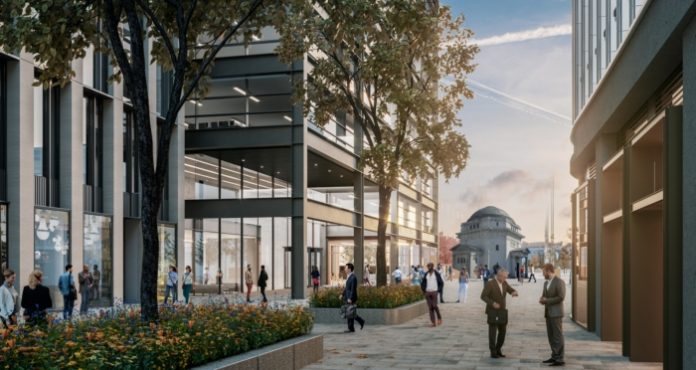 As the £700m transformation of Paradise continues to gain momentum, a planning application has been submitted for One Centenary Way, the next office building proposed for construction on the development in the heart of Birmingham.

With work already well underway on the first two buildings (One and Two Chamberlain Square) together with the enhancement of public space in Chamberlain Square, proposals for the thirteen storey, 280,000 sq ft office building have been submitted to Birmingham City Council.

This application follows on from the recent announcement that leading professional services firm PwC will be taking the entire commercial space in One Chamberlain Square.

One Centenary Way will be the first building developed as part of Phase Two of Paradise. This phase will also deliver a further office building, Three Chamberlain Square, along with a new 250-bedroom 4 star hotel.

Argent, Development Manager for Paradise, has submitted the planning application for One Centenary Way on behalf of Hermes Investment Management, the £30.8 billion manager.

Chris Taylor, Head of Private Markets at Hermes Investment Management, said: “With progress forging ahead on the first two buildings in the ongoing transformation of this part of the city, we are now looking ahead to Paradise’s future phases.

“An outstanding example of place making, Paradise is delivering a new destination at Birmingham’s heart. One Centenary Way will represent a majestic gateway to the development through its unique architecture that is grounded in Birmingham’s industrial heritage, simultaneously contrasting and complementing the more civic architectural details of One and Two Chamberlain Square.”

Rob Groves, Regional Director at Argent, commented: “Working closely with Glenn Howells Architects, together with stakeholders, planners, and following public consultation, we are pleased to unveil the detailed plans for this first building within Phase Two of Paradise – another important milestone for the scheme.

“The design responds to the complexities of the Paradise site, creating an innovative, structural led solution forming a landmark entrance to the scheme. One Centenary Way presents an individual, modern design that will complement the visible transformation of Centenary Square and Broad Street which are already underway and deliver another prominent building for the city’s evolving skyline.”

The application has been submitted following a series of public exhibitions, presentations and events to key businesses, stakeholders and the general public earlier in the autumn, with feedback informing the finalised proposals ahead of submission.

Subject to planning permission, construction of the building is expected to start in 2019 with enabling and final ground preparation works undertaken in 2018.

The building has been designed by award winning Glenn Howells Architects, who are also masterplanners for the Paradise development. Director, Dav Bansal said: “One Centenary Way has been designed to complement its prime location as the western marker to the Paradise masterplan and to span the A38 tunnels. This complex scenario has demanded a creative and holistic approach to the structural facade, resulting in an elegant language that has a distinctive design for the development.”

At 1.8 million square feet, Paradise will deliver up to ten new flagship buildings, offering offices, shops, bars, cafés, restaurants and a four star hotel across 17 acres. Demolition of the former Birmingham Conservatoire and Fletcher’s Walk is now underway to allow for phase two of the scheme to progress.

Planning consultants for the scheme are Turley.