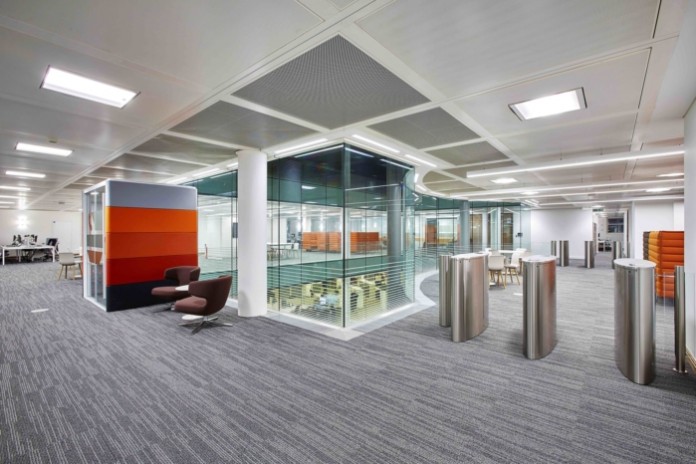 National fit out and refurbishment specialist Overbury has completed an impressive transformation of three floors within an iconic Birmingham building, allowing Network Rail to relocate to new premises.

The engineering company has moved from The Mailbox to 85,000 sq ft of refurbished office space at Baskerville House, located in Centenary Square.

Delighted with the completed office, Network Rail has nominated the new workspace for a British Council for Offices award – an industry accolade which recognises the most inspirational offices across the country and celebrates best practice in commercial fit out.

The move to its new premises was given the go ahead as the previous office had aged significantly, and would have proved difficult to transform with a refit in occupation. Baskerville House was the perfect choice as it is within a 10-minute walk of New Street train station.

Danny Parmar, business development manager at Overbury’s Birmingham-based Central team, said: “We were delighted to have secured the fit out for Network Rail under competitive bidding. This was helped by the pre-existing relationship we have with Network Rail, having worked with the company before.

“It is a very well known and much loved building within the city, and there was a lot of interest in Network Rail’s move when news of it spread last year. This made it an even more attractive proposition for us as it gave us a platform on which to showcase our high quality work.”

The 17-week refurbishment programme consisted of phased handovers on a floor-by-floor basis, which required careful planning and collaboration between the project team and Network Rail employees to ensure minimum disruption to day-to-day operations.

Network Rail owns and operates the railway infrastructure in England, Wales and Scotland. That’s 20,000 miles of track, 40,000 bridges and viaducts and thousands of tunnels, signals, level crossings and points. It also manages rail timetabling and 18 of the largest stations in England, Scotland and Wales. It works round-the-clock to provide a safe, reliable experience for the millions using Europe’s fastest-growing railway every day.