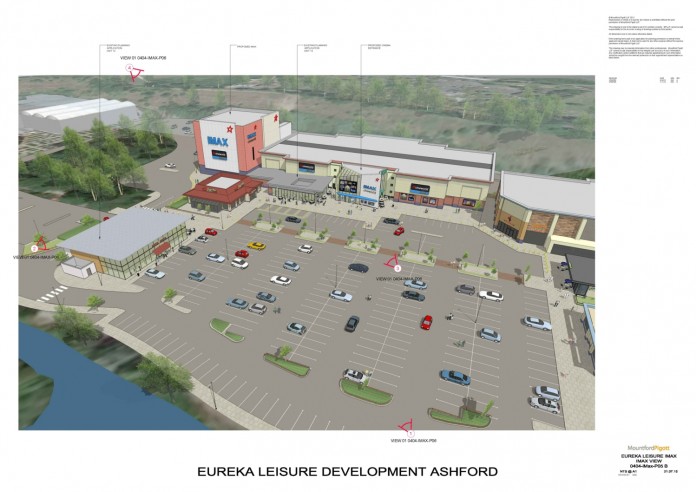 Plans have been submitted for an extension to the Cineworld cinema complex at the Eureka Leisure Park near J9 of the M20 in Ashford.

The application, by Land Securities, is for a further three screens at the Cineworld site, to include an IMAX screen which, if approved, would be only the second in Kent.

The expansion at Eureka will complement the proposed six-screen town centre cinema at Elwick Place. Developer Stanhope PLC was granted planning consent for the £75m scheme in December 2015.

In a separate development, Ashford Borough Council has just announced that the town centre cinema will be operated by Picturehouse, Cineworld’s boutique cinema brand.

Kevin Frost, Property Director at Cineworld, says: “We’re committed to bringing the best cinema choice to our Ashford customers and that means providing both an out-of-town multiplex experience at Eureka, which will include new IMAX and 4DX theatres, and an in-town boutique cinema offer with a best-in-class tailor-made food and beverage service at Elwick Place.”

Cllr Gerry Clarkson, Leader of Ashford Borough Council, says: “That such a high-profile operator as Cineworld has submitted plans for an IMAX at Eureka, in addition to the complementary six-screen Picturehouse cinema which is planned at Elwick Place in the town centre, illustrates that Ashford continues to attract significant investment by major investors and is seen by them as an integral part of their business models.

“Of course it’s imperative that due planning processes are now adhered to regarding this application at Eureka.”

Commenting on the formal announcement regarding Picturehouse at Elwick Place, Gary Bourne, Director at Stanhope PLC, says: “This partnership with Cineworld represents a further major step forward for Elwick Place.

“Cineworld’s commitment to bring the boutique Picturehouse brand to Ashford town centre will make a real difference to the local economy, including in the evening.  Alongside the new restaurants it will strengthen the existing leisure offer, drive growth and benefit the town as a whole.”

In April, Ashford Borough Council announced it was to buy the Elwick Place cinema, hotel and restaurants complex, providing short-term funding to assist with their delivery.

The scheme will transform a brownfield site in the heart of Ashford town centre into a boutique cinema, family hotel and restaurants and cafes. The 6.42-acre site was originally part of the location of the town’s cattle market and will deliver new leisure facilities to transform the night-time economy.

Phase one of Elwick Place is likely to generate around 250 jobs and includes a six screen, 897-seat cinema, a 58-bedroom family hotel, eight restaurant and bar spaces, 282 car parking spaces and attractive public space and landscaping. A second phase of up to 200 apartments is expected to come forward later in 2016.