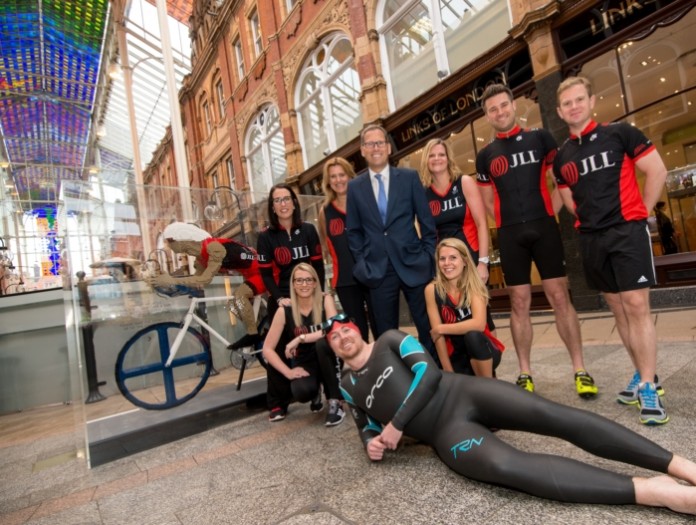 A collection of three life-size Lego people have been unveiled in Leeds by property consultants JLL.

The triathlon-inspired sculptures, made entirely from Lego bricks, have made their home in the city to mark JLL’s sponsorship of the Columbia Threadneedle World Triathlon Leeds which takes place on 11 and 12 June.

Hosted in the city’s three main shopping centres – The Light, Victoria Quarter and Trinity Leeds – the three sculptures will be available for the public to see until 17 June. Featuring a swimmer, cyclist and a two metre tall runner, the models were made from 135,000 bricks and took over 600 hours to build.

JLL is hoping shoppers will pose with the sculptures for a fun selfie and a chance to win Lego vouchers. To enter the competition, people need to post their selfie with #JLLJustLovesLeeds on Facebook, Twitter or Instagram to be in with a chance to win.

Jeff Pearey, Lead Director of JLL’s Leeds office, said: “We are excited to welcome our Lego triathletes to the city and hope, as we get ever closer to race day, that they will help bring this world class sporting event to life.

“The sport of triathlon is becoming the new golf in the business world and supports our aim as an organisation to provide a rounded environment for all.  It’s a great way to engage employees and clients in an event that encourages teamwork and healthy competition alongside fitness and well-being.

“JLL, which has a significant presence in Leeds through our estate agency and commercial business, is proud to be an official partner. Our involvement cements our already strong presence within the sport of triathlon as a result of our corporate sponsorship of double world champion Helen Jenkins as well as last year’s ITU World Triathlon Series event held in London.”

The global property firm, which has 120 staff in Leeds, has also blazed its own trail in the sport by hosting its own JLL Property Triathlons, including its annual event at Dorney Lake near Windsor, which is now one of the UK’s top five largest triathlons.

Leader of Leeds City Council, Councillor Judith Blake, added: “The Lego sculptures look great and we look forward to seeing them in Leeds ahead of the Columbia Threadneedle World Triathlon Leeds. I’m sure they will be very popular with people keen to follow a trail through the city centre to see them all. As a company with a strong presence in the city we are delighted to be working with and have the support of JLL for this event, which promises to be a fantastic weekend showcasing Leeds to the watching world.“

Jack Buckner, Chief Executive of British Triathlon, concluded: “It’s fantastic to see JLL taking a fun and engaging approach to bringing their relationship with the event to life. The triathlon inspired Lego sculptures will all add to the buzz that is constantly building around the Columbia Threadneedle World Triathlon Leeds and being located in the city’s main shopping centres, I hope will attract even more newcomers to our sport to come down and watch the world’s best on 12 June.”

The much-anticipated Columbia Threadneedle World Triathlon Leeds, which is part of UK Sport’s National Lottery-funded #EveryRoadtoRio event series, will provide the British public with the opportunity to watch leading GB triathletes battle for glory against some of the world’s best triathletes in their last race on home soil ahead of Rio.

The Columbia Threadneedle World Triathlon Leeds, organised by British Triathlon in partnership with Leeds City Council, also provides almost 6,000 recreational triathletes with the unique opportunity to compete on the same course as the elite athletes from around the world across a range of different distances, suitable for first timers’ right through to experienced triathletes.