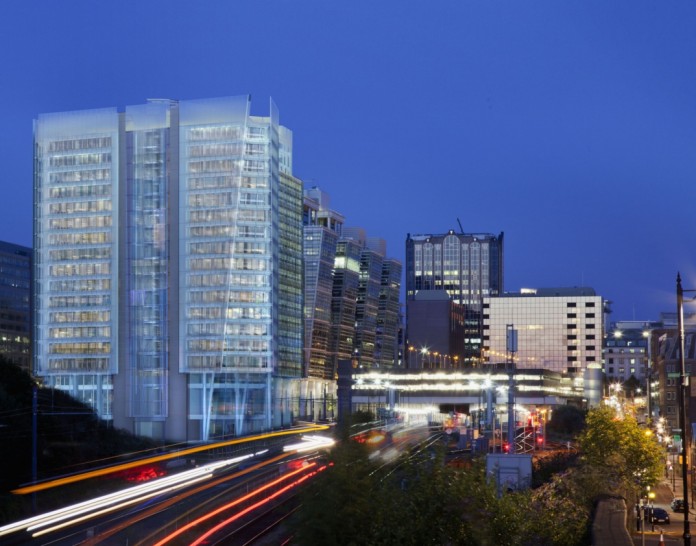 M&G Real Estate, one of the UK’s largest property investors, is to fund the construction of Ballymore’s Three Snowhill, a 420,000 sq ft office development in Birmingham city centre. The circa £200 million scheme will be the largest ever speculative city centre office scheme built outside London.

Chancellor of the Exchequer, George Osborne, comments: “We want to make the Midlands Britain’s engine for growth and this landmark announcement will play an important part in that plan.

“Not only will this project initially create hundreds of important construction jobs in Birmingham, the resulting space will play home to businesses with thousands of valuable jobs right in the heart of the Midlands – a vital step in us rebalancing the economy in Britain.”

Alex Jeffrey, Chief Executive, M&G Real Estate, adds: “Demand from both domestic and international businesses to secure high quality office space in Birmingham has significantly increased, and this is set to rise further with planned infrastructure improvements such as HS2’s Phase One confirmed to start in 2017. While occupier demand continues to outstrip supply and push prime rents upwards, Three Snowhill will benefit from low vacancy rates and support our strategy to provide our investors with long-term income-driven growth.”

Three Snowhill is an Enterprise Zone site and is a key development within Birmingham’s Snowhill Masterplan. On completion at the end of 2018, it will comprise 385,000 sq ft of office space and 35,000 sq ft of retail and leisure, housing around 4,000 workers.

The deal follows M&G Real Estate’s acquisition of Two Snowhill in 2014 and forms the next stage of Birmingham’s wider Snowhill masterplan, which has transformed the northern end of Colmore Row to become the prime location for offices in the city centre.

Ballymore’s Chief Executive, Sean Mulryan, says: “Ballymore is delighted to announce a start on the third and final phase of our Snowhill scheme. Working with the City, our funding partner, M&G Real Estate, and our main contractor, BAM, we will deliver a landmark building and the final element of what is one of the largest and most prestigious commercial developments in Central Birmingham.

“Ballymore committed to Birmingham and the Snowhill scheme over 10 years ago. That long term commitment has resulted in the successful transformation of Snowhill into a new and thriving business district – already home to some of Birmingham’s largest office occupiers, including KPMG, Barclays, Gowling WLG (formerly Wragge & Co) and the HS2 Construction Headquarters.

“Three Snowhill will enable us to continue building and letting large floorplate workspace of the highest quality and complete the Snowhill Estate.”

Andy Street, Chair, Greater Birmingham and Solihull Local Enterprise Partnership (GBSLEP) comments: “With more inward investment and business start-ups than anywhere else outside of London, it is clear that Greater Birmingham is becoming a major driver of growth for the UK. M&G Real Estate’s investment in Three Snowhill demonstrates the confidence in the future of our local economy and underlines the success of our growth agenda.”

Councillor John Clancy, Leader Birmingham City Council, says: “This is great news for Birmingham and builds on the city’s now established reputation as a leading centre for the business, professional and financial services sector. We’re the UK’s most investable city and, with the Masterplan for Snowhill providing a bold vision for replicating the success of places like Canary Wharf together with the £1 billion plus being invested in local infrastructure, it is clear that Birmingham’s attractiveness as a location to invest will continue to grow.”