The availability of Central London commercial property was still below trend at the end of Q3 despite experiencing its first rise in two years, according to CBRE, the global real estate consultancy. Following two years of decline, the figure increased by 6% but was still 29% below the 10-year average of 14.7m sq. ft.

The rise in availability is partly due to a dip in take-up, which fell 11% while remaining above the 10-year average, but more down to the 42% rise in marketed availability as many un-let properties moved within 12 months of completion. Developments headed for completion in 2015 are expected to reach 3.6m sq. ft. and forecasters predict this figure will rise to 6.6m sq. ft. in 2016, marking a return to pre-crisis levels.

Emma Crawford, Head of Central London Leasing, CBRE, said: “Availability in Central London crept upwards in the third quarter after a small dip in take-up, given the hefty rise in City developments nearing completion. I find it extremely promising that by next year, completions will be well over 6m sq.ft, the highest levels we’ve seen since 2009.”

The availability of newly completed and second-hand space fell over Q3, reflected in a drop in the vacancy rate from 2.8% to 2.7%. Meanwhile, developments under offer remained above the 10-year average, despite falling 4% in the quarter. For the first time in two years, the highest proportion of these properties (32%) were in the West End.

Emma Crawford continued: “We’re seeing significant take-up in the West End, with a wave of global capital targeting the area and high profile occupants like Facebook taking up large office spaces. Looking at the Central London area as a whole, despite a small dip in developments under offer, we’re sitting way above average for the decade and should take comfort in the overall growth we’ve seen this year.” 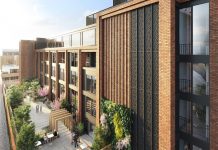