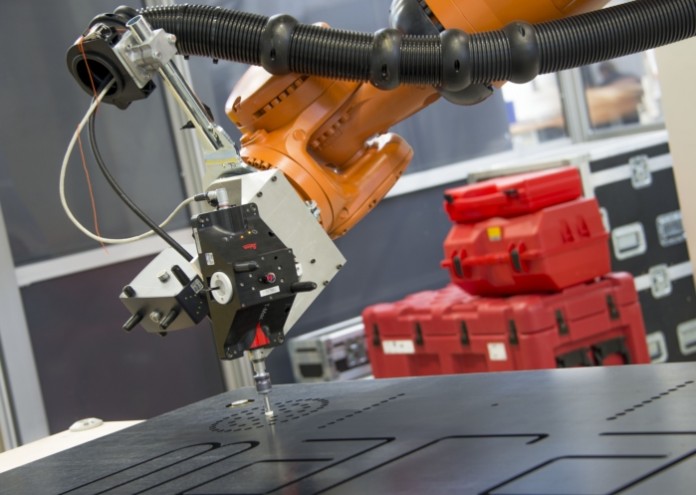 A research project at the Manufacturing Technology Centre has delivered a world first in using metrology to deliver ultra-accurate robotic automation.

The Metrology Assisted Robotic Automation project at the Coventry-based MTC has solved a longstanding manufacturing problem with robotic accuracy, and will result in major improvements in the precision and consistency of robotic operations.

Industrial robots have been used for repetitive tasks for many years, with good results, but the increasing use of offline computer programming has underlined the fact that industrial robots are generally not accurate devices. Previous robot calibration fixes have improved accuracy to better than one millimetre which is adequate for most tasks. However, applications requiring a very high degree of accuracy have presented challenges.

The MTC project combines the robot with a high-speed, ultra-accurate laser tracker from Hexagon Metrology which can make real time corrections to the robot’s path during a process – something which has never been achieved before. The result is accuracy of better than 0.2 millimetres for a robot working at a speed of 50 millimetres a second.

MTC project leader Richard Kingston said the new process had the potential to transform precision, accuracy and consistency in robotic manufacturing operations, resulting in higher quality and a much lower defect rate.

“By combining the robot, the laser metrology device and a real-time controller we were able to ensure that the robot could follow complex paths with an extreme degree of accuracy not previously achievable. The project has proved that it is possible to correct a robot’s path in real time, which is another first. We are now continuing our work to improve accuracy and reliability still further, but this is a fantastic result.”

The MTC project used a Kuka KR240 robot with a Kuka robot controller, integrated with a Leica AT901 laser tracker as a metrology feedback device, and a National Instruments real-time controller.

MTC engineers worked closely with metrology experts from Telford-based Hexagon Metrology, a Tier One member of the MTC, who manufacture the Leica laser tracker.

Brett Green, Hexagon sales and marketing director, said, “Combining the relative benefits of automation, combined with our laser tracking technology, can bring real benefits to processes where both point and path-following accuracy is important. Integrated inspection is another key area for us to explore with this development.”

The MTC opened in 2010 and is a partnership between some of the UK’s major global manufacturers and three forward-thinking universities: Birmingham, Nottingham and Loughborough as well as TWI Ltd.

The MTC aims to provide a competitive environment to bridge the gap between university-based research and the development of innovative manufacturing solutions, in line with the Government’s manufacturing strategy. The MTC is part of the High Value Manufacturing Catapult, supported by Innovate UK.