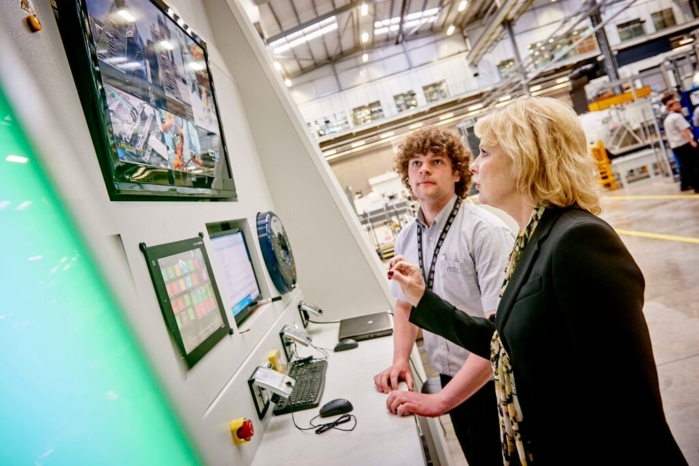 A Government and industry funded National Centre for Additive Manufacturing – which is changing the face of the manufacturing industry – has been formally opened Manufacturing Technology Centre in Coventry. The opening ceremony was performed by Anna Soubry MP, Minister for Small Business Industry and Enterprise.

Anna Soubry has also officially opened the 8,000 sq ft Aerospace Research Centre on the MTC campus – a facility which will provide a national centre for aerospace research in the heart of the UK.

Additive manufacturing – often known as 3D printing is now used across most industry sectors with applications ranging from the production of fine pieces of jewellery to large and complex aero-engine components. The launch of the National Centre for Net Shape and Additive Manufacturing at the MTC confirms the UK’s commitment to developing this ground-breaking technique.

The aim of the National Centre is to develop production-ready additive manufacturing processes, to overcome barriers to wide-scale adoption, and to work on legislative and standardisation issues for this emerging technology.

The Centre has received £15 million of initial funding as part of a £2 billion joint Government and industry package to be invested over the next seven years to ensure that UK manufacturing industry retains its competitive edge.

The Aerospace Research Centre provides a facility in which MTC engineers will work with experts from the world’s major aerospace companies on projects which will define aerospace technology for the future.

The Aerospace Technology Institute provided £15.2 million funding for the new aerospace facility through the Government’s High Value Manufacturing Catapult and Innovate UK, formerly the Technology Strategy Board. This investment has been matched by funding from industry.

Ruth McKernan, chief executive of Innovate UK, said: “These ground-breaking facilities will further reinforce the MTC and the HVM Catapult’s capabilities as a world-class high value manufacturing research and technology organisation. Innovate UK is proud to be working with the Catapult to help drive forward national economic growth.”

The Manufacturing Technology Centre (MTC) was founded in 2010 following a £40 million investment from Advantage West Midlands and the East Midlands Development Agency. It is a partnership between some of the UK’s major global manufacturers and three forward-thinking universities: Birmingham, Nottingham and Loughborough as well as TWI Ltd, the operating division of The Welding Institute.

The MTC is a rapidly growing business. Since its formal opening in 2011, the centre has grown to 350 members of staff and now has more than 80 industrial members, which include some of the UK’s major global manufacturers such as Rolls-Royce, Airbus, HP and GM. The MTC is part the High Value Manufacturing Catapult, supported by Innovate UK (formerly the Technology Strategy Board.)