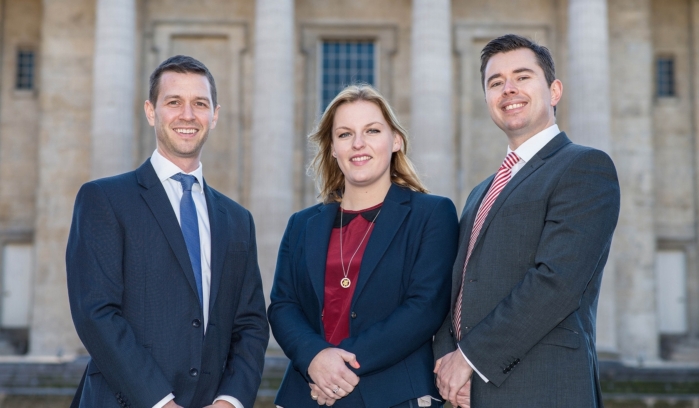 Birmingham-based commercial property agency, Darby Keye Property, is celebrating the end of a first successful year in business, during which the niche firm has capitalised on an increasingly strong demand for employment space across the region.

Following a target-busting first year, which has seen the firm complete more than 50 deals for the likes of St. Modwen, A&J Mucklow, L&G, IM Properties and M7 Real Estate, Darby Keye Property is now on track to double its turnover during the next 12 months.

Chris Keye, director, explained why he believed the firm has fast become another of the region’s SME success stories.  “It’s been an incredibly busy year, we have worked very hard to establish Darby Keye Property as a niche firm and we are already very active across the Midlands.  At the same time we have developed a business model which has helped set us apart in a marketplace dominated by long-established major players.

“We have focused on our specialist industrial and logistics experience and this has resulted in more than 30 industrial disposals.  Acquisitions are also at the core of our business and we have secured warehouse space as far afield as Runcorn, while at the same time working on behalf of a whole host of occupiers in areas closer to home such as Coventry, Rugby, Solihull and Redditch.

“We diversified into the office market quite early on and, although it is unusual for property agents to work across both the office and industrial sectors, this flexibility has actually been a huge advantage to Darby Keye Property and has given us a 360 degree view of the commercial property marketplace.

“In our first year we have completed 16 office transactions and, based on this high level of deals, we are among the most active agents in the M42 office market. This area of the business has grown organically.  Being strategically located in Birmingham and Coleshill has certainly helped us to make an impact on the out-of-town M42 office market, while we have also established an enviable level of visibility across the entire West Midlands market.

“As the momentum increased last year for Darby Keye Property, we took the decision to recruit and, in September 2014, we appointed Alexandra Hess in the role of marketing and online communications officer to drive forward innovative marketing solutions and, crucially, take advantage of the ever evolving world of e-marketing for the benefit of our clients.”

According to James Darby, director, the firm now has its sights firmly set on expansion. “We certainly took a risk starting up a new business while the outlook for property – and the economy in general – was still looking pretty uncertain; however our timing was actually perfect and we have been able to make the most of an improving market, tapping into the increasing demand for employment space.

“Anyone in the industry will tell you confidence is on the up throughout the region and, as we move into our second year of business, we are well placed to continue to capitalise on this.  Over the last 12 months, we’ve taken significant steps forward and have established a solid, successful track record together with acquiring a number of new clients for Darby Keye Property.  We are now focused on driving the business forward while retaining our key values – particularly when it comes to client service.

“Our emphasis has always been on providing a bespoke, personal service with all transactions handled by a director.  We know this is an approach that strikes a chord with our clients as recommendations and word-of-mouth have been behind a considerable number of instructions.  It’s onwards and upwards now and, having built upon solid foundations, we’re really excited for what the future will bring.”