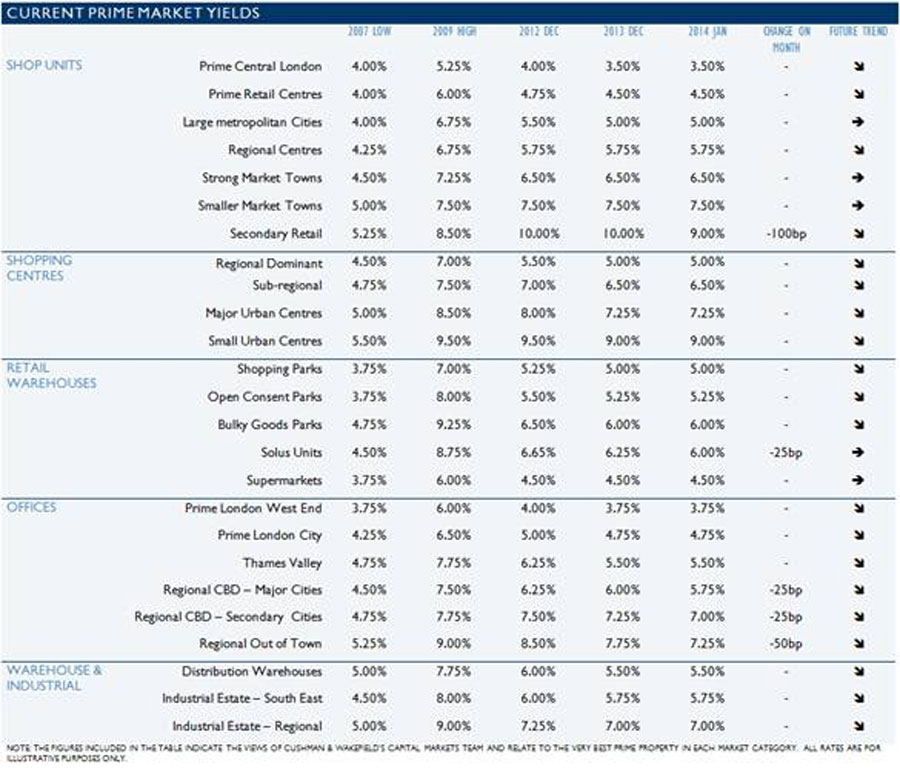 The market continued on the path set in late 2013, with demand ahead of supply, interest spreading from prime to secondary and from London to regional markets and debt markets becoming cheaper and more competitive. As such, a further increase in trading activity is expected this year alongside a rise in values – with a lack of stock the main barrier standing in the market’s way.

Downward yield pressures are at their strongest since 2009 and the gap between prime and secondary is closing as demand increases in second tier markets. This is most notable in office and industrial segments, with shops and retail warehouses still the weakest secondary markets for relative investor and tenant interest.

Occupational demand is rising or stable in most sectors, albeit with differing levels of strength, with London retail, big box industrial and City offices reporting the strongest interest and, alongside Thames Valley offices, the highest excess of demand over supply. Overall, in fact, only secondary retail areas are reported to have more occupational supply than demand and competitive pressures are mounting in most other areas, with incentives and lease terms already under pressure.

Supply is also a key issue for investors, with most segments seeing available stock low and falling and only secondary industrial and high streets reporting a rise in stock coming to the market. Interest in the prime retail sector is up, with significant demand for institutional lots above £10 million in the shops market for example, and high yields are also starting to create more interest in second tier shopping areas. Demand exceeds supply by the widest margin for prime industrial, Thames Valley and regional offices as well as prime shops and West End retail and offices, with only secondary regional markets tending to have any degree of balance or excessive supply.

David Erwin, CEO of UK capital markets at Cushman & Wakefield, said: “There is absolutely no doubt that a significant tranche of capital is still allocated for the UK – both for London and the regions – but the investors are largely all dressed up with nowhere to go. The lack of short-term stock is a little worrying and frustrating volume levels though we anticipate this will change as major mandates are launched at MIPIM and beyond. It’s going to be a busy year.”

David Hutchings, head of EMEA investment strategy at Cushman & Wakefield, said: “As debt availability rises, there is an increasing diversity of lenders in the market as institutions and debt funds establish themselves as serious players. Competition to find opportunities is pushing lenders to take on more risk – both in terms of the assets they will lend on and the terms and scale of debt they will offer – and the underwriting skills of all lenders will be under scrutiny as this move back up the risk curve takes place.”