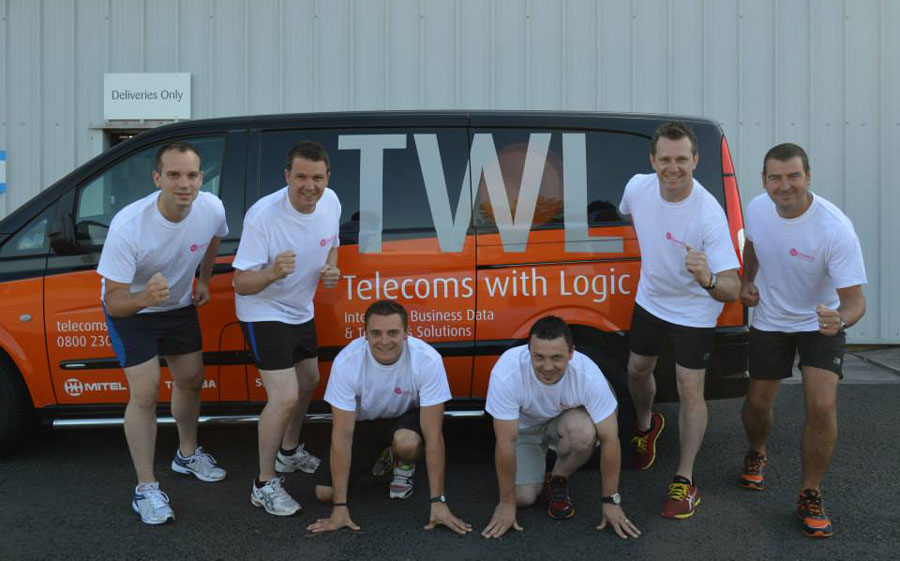 Six employees from a Cardiff-based business telecoms company will be taking part in the Cardiff Half Marathon in October this year.

The team from TWL Voice & Data are hoping to raise £3,000 for St David’s Hospice Care, the UK’s largest provider of hospice at home care.

This will be the first half marathon for all the runners except for Ian England, who entered the London Marathon in 1997.

The team, who are now members of Fitness First in Cardiff, have been attending the gym twice a week and have started road running to prepare for the gruelling 13.1 mile run. The company’s MD, Andrew Nicholson, has also joined Fighting Fit, a crossfit circuit training facility.

Earlier this year, TWL announced Newport-based St David’s Hospice Care as its official charity of the year. Since this, TWL Voice and Data have organised a number of fundraising activities, including a charity golf match which featured guest speakers, Tom Shanklin and Adrian Hadley which helped raise £2,000 for the charity.

Andrew Nicholson, MD of TWL, said: “We decided to enter the Cardiff Half Marathon as we felt it would be a great challenge for all of us and meant that we could raise more money for St David’s Hospice Care. After working with St David’s Hospice Care earlier this year, we were able to see how much a difference the charity makes to people, which is why we chose it as our official charity partner.

“We’ve already started training so we hope to be in top shape by October and hope to raise as much money as we can for St David’s Hospice Care.”

Providing care at home and at its in-patient unit for over 3,200 patients each year with cancer and other life-limiting illnesses, the charity, which is based in Newport, requires £7m a year to offer its service for free to patients, carers and families across Caerphilly, Monmouthshire, Newport, Torfaen and South and Mid Powys.

Adrian Hadley, deputy chief executive of St David’s Hospice Care, said: “St David’s Hospice Care are extremely grateful to Andrew and everybody at TWL for adopting us as their charity of the year and getting their staff involved in of a range of activities to raise much needed funds for the hospice. Community involvement such as this is vital to the hospice fundraising activities as we receive less than 20% of this funding from the NHS.

“I take my hat off to the six individuals who are running the Cardiff Half Marathon this year because I am aware of the amount of effort that needs to be put in prior to the race to get yourself to a stage where you are able to compete. I would like to wish them every success and thank them on behalf of everybody at St David’s Foundation Hospice Care.”

Anyone wishing to donate can do so by visiting https://www.justgiving.com/teams/TWLCardiffHalfRunners